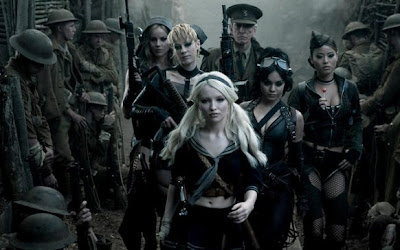 Sucker Punch: Sure, the story wasn't deep, some of the acting was poor, and the dialogue could tend to be laughable. But I went in to the matinee expecting some kick ass action and an embarrassment of visual riches and that's just what I got. Were there hot chicks with guns, dragons, steampunk robot Nazis, runaway trains, living stone samurais, and Don Draper? Yes there were. The flick's not as terrible as everyone says. Basically, it's a mess, but a fun one. (Sucker Punch was initially filmed as a sort of musical (!), but was later recut into a traditional action movie. I'm dying to see the original version.)

Paul: Shaun of the Dead is one of my all time favorite movies. Hot Fuzz is a riot. This Simon Pegg/Nick Frost film is different from those two, though, because it lacks the directorial skills of Edgar Wright, so I went in with my expectations lowered. Even only expecting a solid flick, I still didn't really care for Paul. I got a lot of the geek references. The performances were fine. Pegg and Frost still had their usual chemistry (and some terrible haircuts), but the movie just wasn't all that funny. What a shame.
Posted by Micah at 9:35 AM