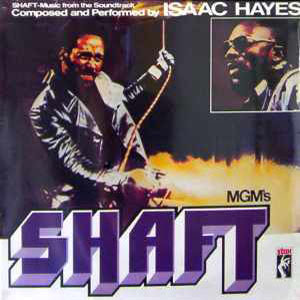 This morning I ripped Issac Hayes' Shaft soundtrack and put it on my iPod. Damn right.
Posted by Micah at 9:59 AM 2 comments:

This is called "blog filler"

(It gets pretty twisted towards the end.)
Posted by Micah at 9:54 PM 3 comments: 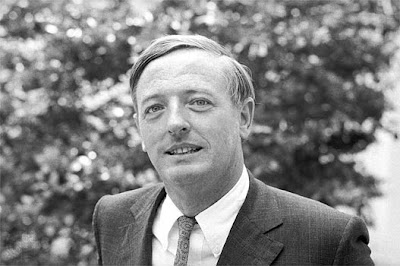 You're no doubt up there fighting the good fight, using words that would make even Noah Webster consult a dictionary.

I bought one of his word-a-day calendars in the 90s and tried to incorporate each day's word into everyday conversation. That lasted about a week.
Posted by Micah at 1:42 PM 4 comments:

I guess I'll have to watch with a case of PBR, an ill-fitting t-shirt, and a sense of detached hipster irony

God help me, but I think I may actually watch "Dancing with the Stars" this season. The cast was announced and among them are Penn Jillette, Adam Corrola, and Steve Freakin' Guttenberg. Well, I'll likely just stick with it until Penn bows out, since he's who I'm most curious about bringing the pain.

In other TV news, the second season of HBO's most excellent "Flight of the Conchords" has been pushed back to 2009. Thank you, striking writers! I hope that extra few pennies are worth my severely decreased level of happiness this year.

At least we'll be getting a new Flight of the Conchords album this spring, even if it is only made up of retooled versions of songs that appeared in the first season of the show.
Posted by Micah at 10:34 AM 4 comments:

A new bundle of joy 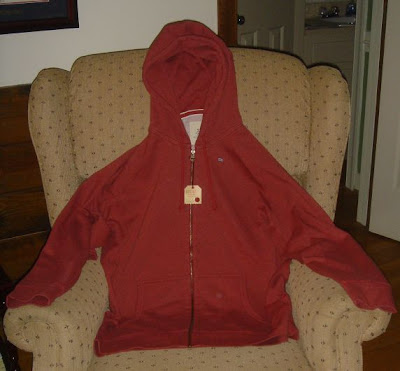 My hoodie family got a little bigger on Sunday: meet Redrum (dip dip dip...sweatshirt). It's lightweight, so it'll be perfect for the waning days of Virginia "winter." Please join me, Greybeard, Black Dog (currently m.i.a.), Blueball, Spiderboy, Greenhorn, and the Professor in welcoming him aboard.

In related news, due to a clearance sale and a free shipping coupon, I expect to receive another grandpa sweater (green this time) sometime within the next week. 23 skidoo!
Posted by Micah at 8:36 PM 4 comments:

Email ThisBlogThis!Share to TwitterShare to FacebookShare to Pinterest
Labels: fashion

This week's Bonus Crush is Czech singer/songwriter/Oscar winner Marketa Irglova. She is also a dater-of-men-18-years-older-than-her (you go, Glen!). 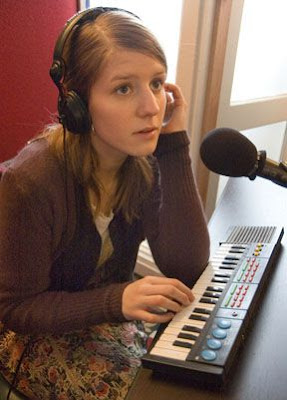 She and Glen Hansard are coming to Richmond in May and I'm hoping that I can score tickets.
Posted by Micah at 8:08 PM 3 comments:

Crush of the Week: Marion Cotillard

This week's Crush is actress Marion Cotillard. I first saw her in Big Fish and thought she was something back then. Actually, that's the only thing that I've ever seen her in. 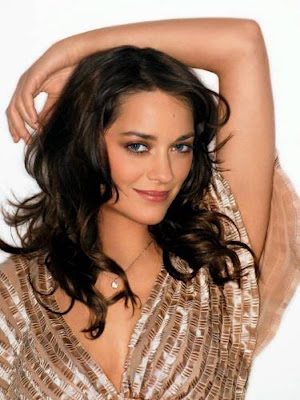 By giving Marion an Oscar last night, the Academy continued its tradition of awarding beautiful women who ugly themselves up.
Posted by Micah at 8:01 PM 2 comments:

In a shocking display of out-of-the-loopiness, the only movies up for Oscars tonight that I've actually seen are ones in the "lesser" catagories: Once, Ratatouille, The Bourne Ultimatum, 3:10 to Yuma, and Transformers. All are great, except for the last. It is shit.

Anyway, I'm throwing my full support behind the only nominee that I care about this year: "Falling Slowly" by Glen Hansard and Marketa Irglova, for Best Song. Hopefully, the three songs from Enchanted will cancel each other out and this hauntingly beautiful song will take the prize. Check it out above (it's a great scene, but the song really kicks in at around the 1:20 mark).

I'll be keeping tabs with y'all in the comments, if anyone drops by this year (previous years have been a hoot; read 'em here and here). And if this isn't enough for you, the Onion's A.V. Club will be live blogging the ceremony.

Given that it's an election year, the writers strike just recently was resolved, and a glut of anti-war movies were released in 2007, the acceptance speeches and whatnot are sure to be nigh-insufferable. Let the Hollywood Circle Jerk commence.
Posted by Micah at 7:48 PM 24 comments:

Why am I so obsessed with this song?

Don't Stop 'Til You Get Enough: a Savannah photo essay

This past weekend was a Bloggers Convention of sorts, where spydrz, Simply Reg/THSE/SBN1, Dem L____ Boyz (Herodotus and Dr. Zeius), and myself met up in Savannah, GA. It was a beautiful weekend in the historic city and not just because of the sunny weather (the town has this weird, wonderful mix of Southern Belles and hot arty women). We ate well and drank even better. The following are some pictures from that part of our trip: 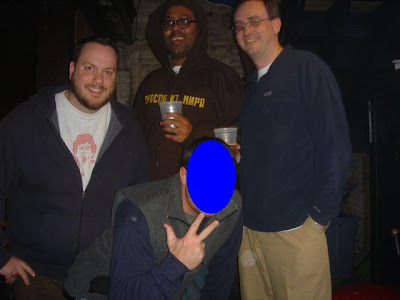 The gang at B & B Billiards (not pictured: Dr. Zeius, who had bailed before this picture was taken) 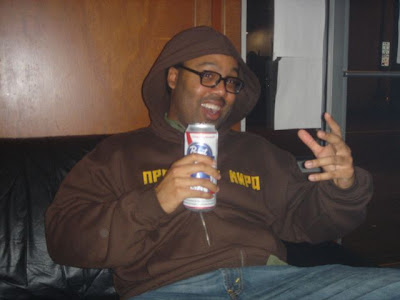 Simply Reg and I went on a recon mission to scout out other bars. The above was taken at a hipster joint called Hang Fire. 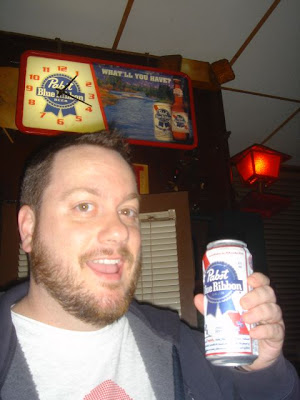 Then it was on to Pinkie Master's, where I had my very first PBR (I had to fit in with the hipsters). 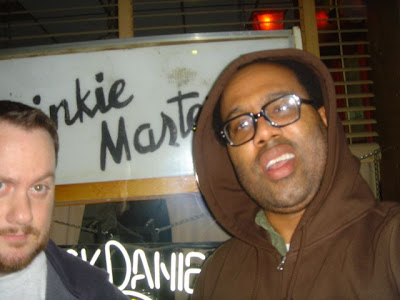 Taking in some of the too-cool-for-school crowd and realizing that the rest of the group wouldn't go for it, we retreated back to the comforting womb of B&B and it's kick-ass jukebox*. 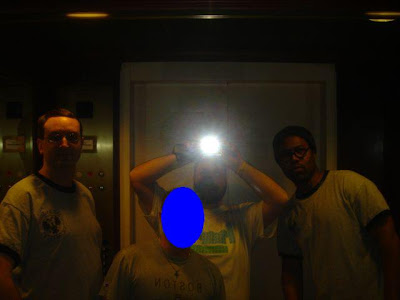 One last shot, in a hotel elevator on the day we left town. 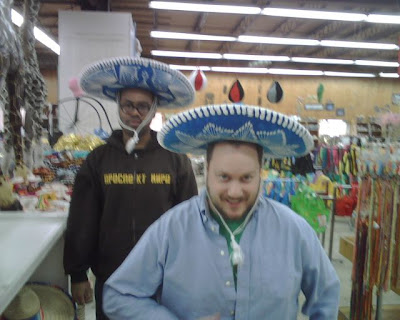 Just a couple of caballeros at the second happiest place on Earth - South of the Border. We're also the bi-racial Hall & Oates.

You can read dispatches from my compatriots here and here.

*I learned the hard way that the penance for playing Eiffel 65's "I'm Blue" is to buy the bartender a shot after she calls you out in front of the whole bar.
Posted by Micah at 3:14 PM 9 comments: 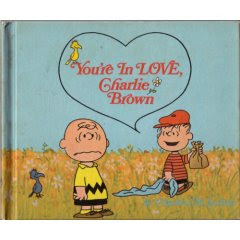 Now, I'm no fan of Valentine's Day and I even compiled an Anti-Valentine's Day mix tape on this blog a couple of years ago. While my white hot hatred for the lovey-doveyness of all things associated with this day still remains, I thought that I'd compile another mix tape, only this time with songs on my iPod that have certain greeting card holiday-themed key words in their titles. So, here you go:

So, there you go.

Me? I'll be spending tonight at the gym (maybe), eating a big bowl of rice (possibly), and cursing all of the happy people (most definitely).
Posted by Micah at 10:02 AM 2 comments: 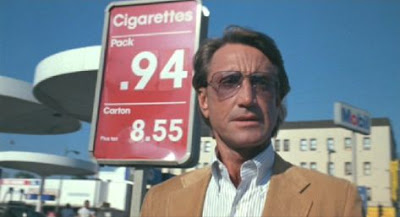 You finally got that bigger boat.
Posted by Micah at 7:18 AM 2 comments:

I saw the Michaels! 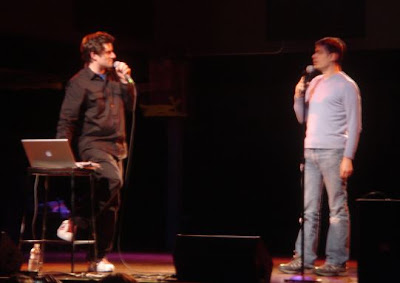 This past Friday I saw comedy gods and The State/Stella members Michael Ian Black and Michael Showalter at Toad's Place, the first stand-up show ever at the venue. It was a really funny night, one I've been waiting for since the early 90s. Showalter instantly got mad props from me for chanting "Spiders!" as he came out on the stage. Upon reflection, I think MIB was more consistantly funny, but Showalter's set was the best.

Some highlights, which'll make no sense unless you were there:

Check out MIB's blog post about my fine city.

Now, bring on The State DVDs!

As for Toad's Place, it was my first time there and I liked it. The sound was good and the room was clean and smoke-free (refreshing, so long as it's market-driven and not government-mandated!). Ever since the Flood Zone closed down, there's been a dearth of places to see shows by artists whose status is between local bar band and superstar. I'm glad the void has finally been filled.
Posted by Micah at 10:32 AM 2 comments:

Email ThisBlogThis!Share to TwitterShare to FacebookShare to Pinterest
Labels: comedians

Coincidence? I think not.

Yesterday saw the release of Jack Johnson's new album AND it was a beautiful, sunny 77 degree February day.

I'll be giving the record a spin today while I'm trapped in my cube, dreaming of late March's beach trip.
Posted by Micah at 8:59 AM 4 comments:

The zombie apocolypse will be televised

I can't tell you how jazzed I am for George Romero's new zombie film - Diary of the Dead. Right now Richmond isn't on the short list of cities that will be showing it on opening day (Feb. 15), but I'm optimistic that we'll be getting it...sometime.

The only trepidation I have is that, while I know that at least part of it is filmed in that shakey-cam style which all the kids love nowadays, I don't know if the whole thing is shot like that. See, I DETEST that style of filmmaking, especially if it is overdone and unnecessary. I got sick because of it during The Bourne Supremacy and it's what is stopping me from seeing Cloverfield. But this is a zombie flick. A George Romero zombie flick. I have to see it right when it comes out. Guess I'll just down a handful of Dramamine pills beforehand.
Posted by Micah at 9:20 AM 3 comments:

I guess my pre-order will be cancelled. 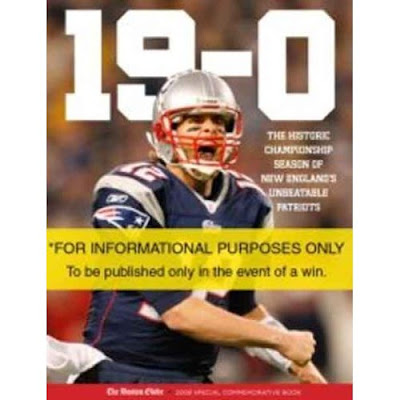 I only really care about college football, but it was good to see the underdog win tonight. Suck it, pretty boy.
Posted by Micah at 10:31 PM 3 comments: 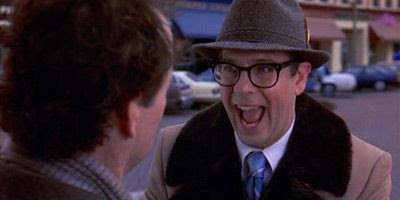 This is pitiful. A thousand people freezing their butts off waiting to worship a rat. What a hype. Well, it used to mean something in this town. They used to pull the hog out, and they used to eat it. You're hypocrites, all of you.
Posted by Micah at 1:39 AM 7 comments:

Not to turn this blog into a Stallone lovefest or anything... But isn't this 3-D Rocky poster that I got for Christmas just the bee's knees?