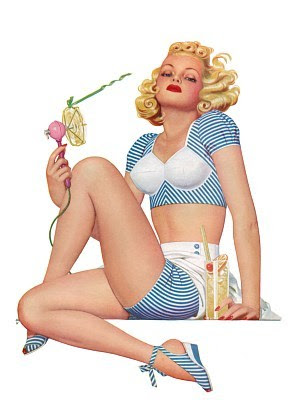 Another summer, another mix.

Not all of the songs on my CD are available to stream, unfortunately, so here are the missing songs (YouTube links where available):

You can catch my other seasonal mixes here, here, here, and here.
Posted by Micah at 10:55 AM No comments:

Is your mouth watering? 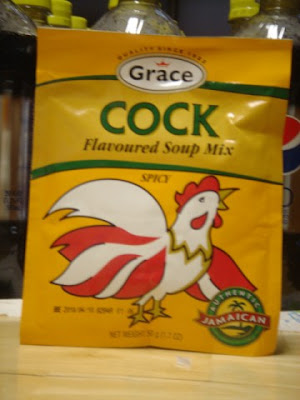 Requiem for a television rebel 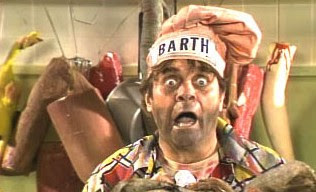 Despite what the censors dictated, he did do that on television.
Posted by Micah at 10:55 AM 6 comments:

And now a preview of my upcoming Summer Mix CD. This may be my favorite single of the summer of 2009. I love everything about it: the bombastic over the top Queen-esque theatrics, the male/female vocal interplay, the steel drums. Every song should have steel drums in it.

If all of fun.'s upcoming album is like this tune, it's sure to be a winner.
Posted by Micah at 10:35 AM No comments:

Crush of the Week: Laura from Big Brother 11

This week's Crush is bikini-filler Laura from Big Brother 11. I'm a reluctant BB viewer (damn you, spydrz!), but she caught my eye. 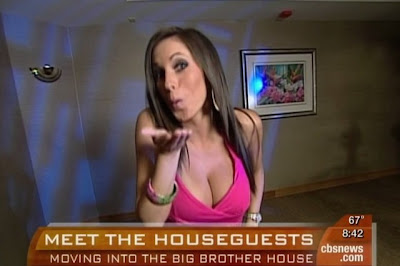 If she's eliminated this week, two of the biggest reasons for me to keep watching this show will be gone. And when Jordan leaves...forget about it.

I hate myself for knowing who these people are.
Posted by Micah at 3:05 PM 5 comments: 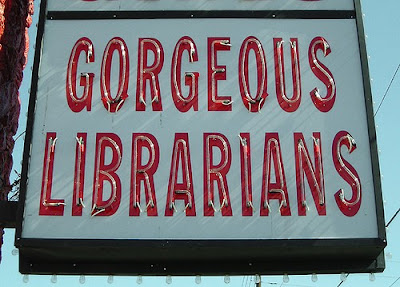 Photo credit: supremely awesome picture by Roadsidepictures on Flickr
Posted by Micah at 11:05 AM 2 comments:

Michael & Michael have a new show. 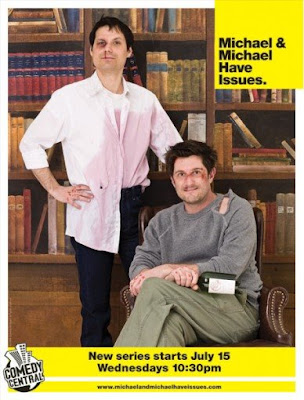 If "Michael and Michael Have Issues." is half as brilliant as "Stella" or "The State", I'll be a happy camper.
Posted by Micah at 10:15 AM 1 comment:

Sure, "According to Jim" gets a DVD release...

Today sees the release of the much-delayed DVD set for the 90s MTV sketch comedy show "The State" (my order's on the way from Amazon!). I absolutely loved this show when it first came out and really look forward to immersing myself in it again this weekend. Since The Now pretty much sucks, I like to take comfort in pop culture nostalgia (especially that of my high school and college years) and the wait for these DVDs has been nigh excruciating. Rejoice! For we all will finally be able to cheer on Bologna Feet, eat Grandma's potato chowder, and discover the proper way to wear pants.

The release of "The State" DVDs got me to thinking about what beloved video treasures of my past are not yet available in the format. Pretty much everything I want is out there now (or will be released shortly), but there are some glaring gaps in my collection:


Steve Martin: Comedy Is Not Pretty - When I think of my pop culture childhood, watching this NBC special comprised of comedy sketches is among my most cherished memories. Martin was at the height of his goofy stage (as opposed to his current unfunny kiddie movie phase). There were guest stars aplenty: Peter Graves! Regis Philbin! Paul Reubens! Joyce DeWitt! The highlight was probably when Martin acted out Marty Robbins' country & western chestnut "El Paso"…with chimps!

"Get a Life" - Ah, the Holy Grail of my DVD Wishlist. Comedy genius Chris Elliott plays a 30 year old paperboy. That's pretty much all you need to know about this series. Years ago Rhino put out a couple of DVDs with a handful of episodes on each them, but I want complete seasons, dammit! Elliott has said that years ago he recorded commentaries for the first season, so at one time the gears were in motion. I recently downloaded the full series on the down low, but it'd be nice to get this in a quality higher than the seemingly third generation VHS dub transfers that I have.

"Ed" - I'm an unabashed Tom Cavanagh fan. The guy's just so quirky and funny and this David Letterman-produced show (where he first caught my attention) was a perfect fit for his talents. How can anyone not fall for a show about a disgraced man moving back to his small Ohio hometown to run a law firm/bowling alley and woo his high school sweetheart? Sure, the show inevitably lost some steam in its last season when "will they or won't they?" turned into "they did," but it was still really enjoyable. As with its big screen romantic comedy counterparts, there were montages aplenty - usually at least one per episode - and word has it that music rights issues are keeping this from seeing the light of day.

"Love Monkey" - Another Tom Cavanagh show, only this one was about an indie rock A&R guy and his trials and tribulations with musicians, women, and his major label former employer. Yeah, it pretty much played to my music geekery and Cavanaugh fandom. Unfortunately, this series got canned after only a handful of episodes aired. Repeats have currently been popping up on the Universal HD channel. Could there be a Blu-Ray release in the future? Unlikely, but my fingers are crossed.

"The Knights of Prosperity" - This one season wonder centered around a bunch of oddballs who try to pull off the perfect crime: robbing Mick Jagger's apartment (I much prefer the show's working title: "Let's Rob Mick Jagger"). Like "Ed", this was produced by David Letterman and shared its offbeat sense of humor. But it died a premature death and I'd love to revisit it.

"Mystery Science Theater 3000" - Shout Factory! has recently taken over the distribution reigns from Rhino and so far they're doing a bang-up job. Some episodes of this show will never get a proper release, though, because the licenses of certain movies that Joel, Mike, and the bots riff on have lapsed. And there are also some rights holders who don't like the fact that their poorly-made films were the butt of so many endless jokes by the Best Brains crew. Luckily, the folks at the Digital Archive Project are "circulating the tapes."

"Beavis and Butthead" - Yes, there are "B&B" DVDs out there, but they don't include the best part of this show: the music videos. Come on, Enuff Z'nuff, Pantera, etc. Don't be buttmunches. Grant your permission to use the videos.

"Heat Vision and Jack" - Okay, considering that this is an unaired pilot for a series that was never picked up, I realize that the likelihood of it ever officially coming out is about zilch. But it's got a sizable cult following and how could it not? It's got all of the elements of classic: Ben Stiller's direction, Jack Black as an astronaut who becomes a genius every night at sundown, Owen Wilson as a talking motorcycle, and the late Ron Silver as an evil version of himself. Knowledge is power…for real! (Watch part one here and part two here.)

Ed's Next Move - This is the only film left that I want to come out on the format (well, this and a release of The Man With Two Brains in its proper aspect ratio). It first landed on my radar during my college radio days when I got a free copy of the excellent Ed's Redeeming Qualities-heavy soundtrack (the band plays a central onscreen role in the film). Since getting the soundtrack, I've only seen the movie once, but I remember finding it pretty charming.

I hold some hope that these will one day live again. After all, other shows and movies that I like a lot and thought were lost forever - "The Tick", "Kitchen Confidential", The Chocolate War - have gotten DVD releases.

Since when do effete, Volvo-driving, latte-sipping NPR types shop at Dollar Tree? 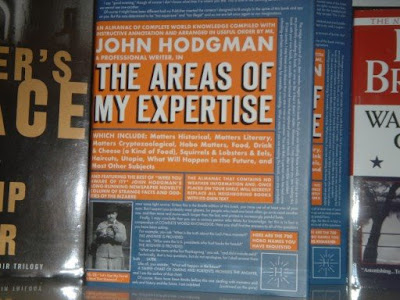 As I was picking up some supplies at Dollar Tree this weekend - oh, those delicious and dirt cheap maple cookies! - I noticed, mingling on the shelf with various baseball books and Bibles, a tome that I never thought would be sold there in a million years: The Areas of My Expertise by John Hodgman (the "PC guy" from those kinda funny yet also annoying Mac ads). I'd been meaning to give it a read for years now, so of course the one buck price tag made it a no-brainer for me to snap it up. Just flipping through this faux almanac, I think I've found a new bathroom book to replace the recently-read Our Dumb World by the Onion.

I passed on the very current book about Nü Metal, though. Maybe I'll pick that up for a laugh on my next trip. Or not.

Also at the Dollar Tree were a couple of Barenaked Ladies CDs that I shelled out $15 and $20+ for on their respective release dates. If only I had chosen to delay my gratification for six years, I could've saved a ton.
Posted by Micah at 10:45 AM 2 comments:

Song to get you through the weekend: "Daylight" by Matt & Kim

I had already compiled my Summer Mix* when I had this infectious tune by Matt & Kim on last week's "Sound Opinions" podcast. Had I heard this earlier, I definitely would've made room for it on the CD.

You can download this single (and a couple of remixes) for free here.

*Well, I haven't actually burned the CDs yet, but I've printed up all of the covers and ink ain't cheap.
Posted by Micah at 10:59 AM 2 comments:

Some interesting articles that I've read over the past week:

Song to get you through the weekend: "Fourth of July" by Shooter Jennings

This week's choice is a no-brainer.
Posted by Micah at 10:12 AM No comments: 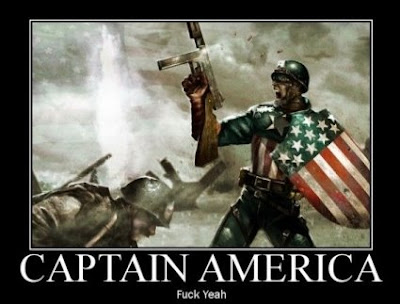 Need some good reads to pass the time? Here are some interesting articles that I've come across lately (100% Michael Jackson media circus-free!):

That's about it for now. I think I'll make this a regular thing (yeah, it's easy blog filler).
Posted by Micah at 10:45 AM 3 comments: