Requiem for the last comic standing 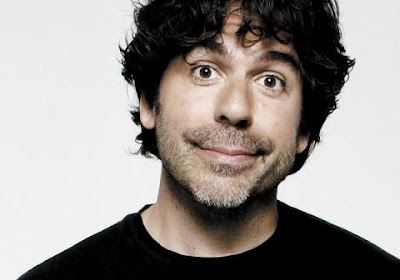 He was my favorite lawyer/comedian, after Demetri Martin*.

*Technically, Martin's a law school dropout, but close enough...ladies.
Posted by Micah at 7:32 PM No comments:

College football, week four. The calendar may say it's autumn, but it sure doesn't feel like it. The Great Xbox 360 Swami doesn't feel the disconnect, though. Why would it? It's a gaming system. Anyway, here are its CPU vs. CPU predictions for today's games: 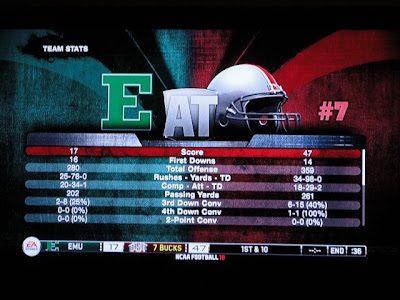 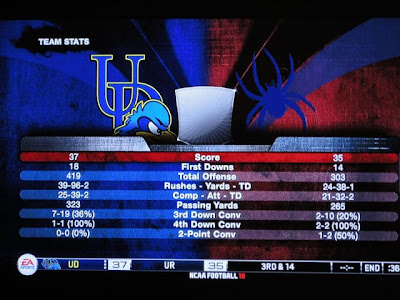 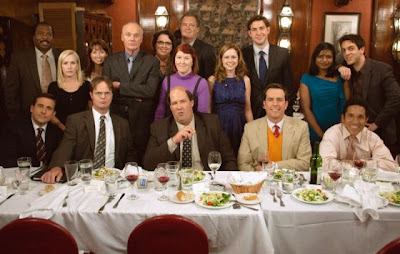 Tonight's episode of "The Office": "Nepotism"

The office turns against Michael when he refuses to fire the new office assistant, who has a bad attitude and is his nephew. Erin shows interest in another man, and Andy tries to play it cool. Pam pulls an office prank on her own to impress Jim. 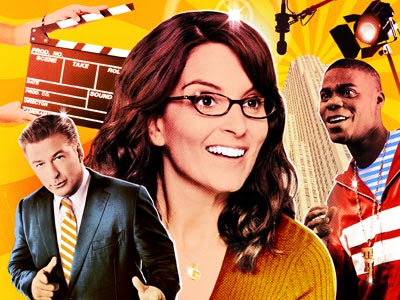 Well, before leaving for work this morning, I sent this this tweet:

Imagine my surprise when I got this direct message later on in the day:

How cool is that? (Especially considering I didn't use a hashtag or link to his account and he doesn't follow me.)

So, professional humoredian Doug Benson, for taking two seconds out of your busy day to thank a fan, as well as providing me with countless hours of entertainment over the years, I am adding you to the Micah World Cool People List. I urge everyone reading this to follow you on Twitter, subscribe to your "Doug Loves Movies" podcast*, and grab your stand up albums. Now, how about doing a show in Richmond?

It's only a matter of time before Kenny Rogers reaches out to me. C'mon, man! I ironically bought your shirt.

*I listen to way more podcasts than any normal person should - thank you, brain dead job! - and his is my favorite. Are you a comedy geek and a film buff? Then you'll like it.
Posted by Micah at 10:15 AM 3 comments:

We enter the third week of this most glorious football season with the christening of Richmond's new on-campus stadium (finally!). Will the Spiders ring in their new digs with a victory? The Great Xbox 360 Swami's CPU vs. CPU games predict the following: 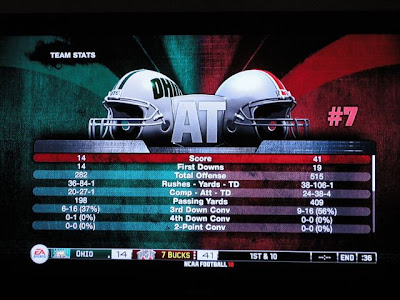 Take that to the bank.
Posted by Micah at 9:58 AM No comments:

Crush of the Week: Laura Allen 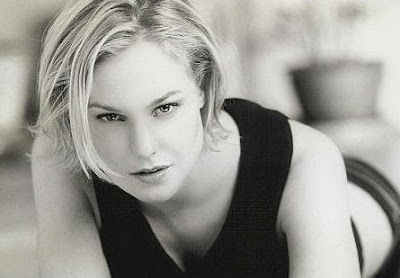 It's only been on for two weeks, but I'm really digging "Terriers", so far. Too bad no one else is watching. At least it's on cable, so it won't be permanently yanked after three episodes. *cough*ABCNBCFOXCBS*cough*
Posted by Micah at 10:25 AM 2 comments: 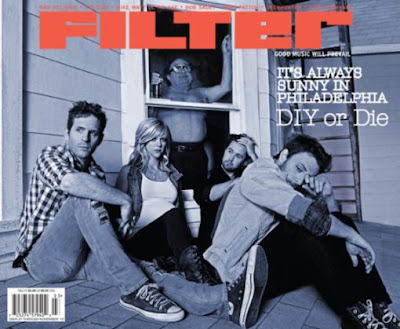 Mac pulls out the big guns to protect the sanctity of marriage, while the rest of the gang reaps the rewards of marital bliss.

Due to popular demand, I will be making Grilled Charlies again. Pray for me.

Yes, Mr. Williams, I *am* ready for some football. Thank you for asking. 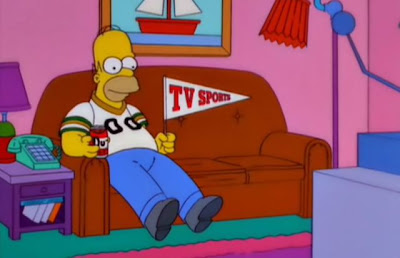 I am a college football fan. My veins bleed Buckeye scarlet and Spider blue. If either are playing, I'm watching. But I don't really follow the NFL. And by "don't really", I mean not at all. Sure, I'll watch a few regular season games (parts of them, at least) and, of course, the Super Bowl commercials, but I don't care about team rankings and whatnot. I find the NFL's biggest appeal is as background noise to my autumn Sunday afternoon naps.

For a time back in college I rooted for the Jets. But my short-lived fandom was born out of a funny series of Nike commercials where Joe Namath attempted a comeback ("We beat the Colts!") and the sad fact that the 1996 Jets went 1 for 15 and I figured that somebody had to support them. Plus, Kevin Arnold was a fan. So I did what I could. I even bought a hat and a sweatshirt. The next season they had a respectable 9-7 record. My work was done.

So this season I thought it'd be fun to pick one team again and follow them throughout the next 17 weeks. But the question begs, which one?

Though they are the local favorites, the Redskins are out. I got really sick of yellow and red when I was growing up. The Cowboys are "America's Team" and a favorite of my dad's, but I want to be my own man (though Hank Hill's love of them is a strong argument in their favor*). The Packers are appealing, have a storied history, and play in a colder climate - plus, I really, really like cheese - but I think they're a bit too good for me to root for. I could kick it old school and be a Jets booster again, but I want something new. The Patriots? Please. My Ohio ties compel me to choose the Browns or the Bengals, but I want to look beyond the Buckeye state. I don't have a big enough stockpile of throwin' batteries to be an Eagles fan. The Bears (and the Saints) have the Ditka legend. And the Steelers are agreeable. But none of these franchises feel like a good fit.

No, none of those teams need me. There is only one team that is comprised of the suckiest bunch of sucks that ever sucked. Only one team calls America's burned out urban cesspool home. Yes, for 2010 I will become...a Detroit Lions fan. They were freakin' WINLESS last season. How could I not root for them? Now, given their distance from me and the fact that they blow, I'm not sure how many games will be broadcast around these parts. I'll at least watch the Thanksgiving game. But I'm sure I'll have to primarily follow them through web sites and Sports Center clips.

So, how'd by my boys do yesterday? They lost to Chicago. Seems like old times.

*And an excuse for me to post this chestnut: "Dallas? I don't want you goin' to Dallas at all. That place is crawlin' with crack-heads and debutantes, and half of 'em play for the Cowboys."
Posted by Micah at 10:15 AM No comments:

Email ThisBlogThis!Share to TwitterShare to FacebookShare to Pinterest
Labels: football

Song to close out the weekend: "The Outdoor Type" by the Lemonheads

"I can't go away with you on a rock climbing weekend. What if something's on TV and it's never show again?"

This is my theme song. But I am greatly digging the slightly cooler temperatures.
Posted by Micah at 9:04 PM No comments:

We enter the second week of this most glorious season with an Ohio State game against the hated Hurricanes of Miami and Richmond off on a bye week. Curious about what the Great Xbox 360 Swami predicts will happen this afternoon, via a CPU vs. CPU match? You're in luck. 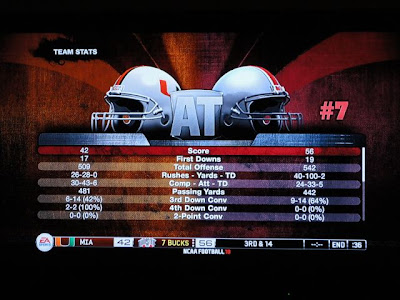 Your favorite blog feature is back! Yes, once again it's time to harness the awesome computing power of my Xbox 360 and my copy of NCAA 10 to determine the outcome of this season's Ohio State and Richmond football games (and I'll also take requests, time permitting). Each week I'll run CPU vs. CPU match ups and will post the results. This season things will be a bit askew since I'm using last year's video game, but really, does it matter in the grand scheme of things?

So, what's going to happen today? Here you go: 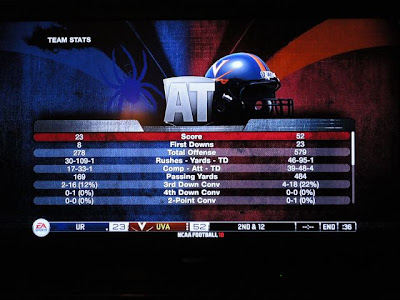 Now, the OSU-Marshall game caught me unawares and I didn't have time to run it through the Xbox. They would've won anyway. Trust me.
Posted by Micah at 10:08 AM No comments: