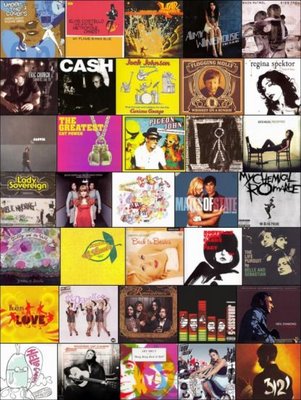 All of the '06 albums that I purchased or otherwise "acquired"*

1. Rabbit Fur Coat - Jenny Lewis with the Watson Twins Rilo Kiley frontwoman is joined by a couple of gospel singers and cuts a country-tinged album. Amazing stuff.
2. Jarvis - Jarvis Cocker Like Pulp? Then you'll love this album. Jarvis grows older, but with his detached coolness intact.
3. Alright, Still - Lily Allen Believe the hype. Every song's a winner on this one. Maybe a bit too "British" for American dominance, though.
4. The Life Pursuit - Belle & Sebastian B&S's sound gets even fuller (although they're still pretty twee).
5. Back to Black - Amy Winehouse The retro R&B album Christina Aguilera wishes she made.
6. ...And the Summertime Pool Party - Pigeon John PJ signs to a secular label and rebounds from the pretty "meh" last album. He's found what's missing in most of today's hip-hop: fun.
7. Begin to Hope - Regina Spektor Her vocal quirks aren't for everybody, but this is quality music.
8. American V: A Hundred Highways - Johnny Cash An eerie transmission from the grave that ranks among the best of his latter-day material.
9. Piece by Piece - Katie Melua With this album Katie sheds her "Norah clone" image. Plus, it's got the guy who played the flute on The Good, the Bad and the Ugly on it.
10. The Black Parade - My Chemical Romance Emo boys play dress up and enlist the producer of American Idiot to help them make their own rock opera. And it's surprisingly good.

Biggest personal trend: imports
Three of my Top 10 albums weren't available domestically in 2006, as was another one in my Top 30. And I'm still dying to get those Pulp reissues.

*Oversight: I left off the Say Anything disc.
Posted by Micah at 9:32 PM 9 comments:

For some reason, I left my country picks off of the list:


Eric Church - "Two Pink Lines" Never has a pregnancy scare been so catchy.

Jace Everett - "Bad Things" "I don't know who you think you are, but before the night is through/I wanna do bad things with you." If you've got to copy someone, it might as well be Chris Isaak. (Sony had the video taken down from YouTube, but you can watch it on his site)
Posted by Micah at 5:34 PM 5 comments:

Email ThisBlogThis!Share to TwitterShare to FacebookShare to Pinterest
Labels: Best of, music, YouTubery 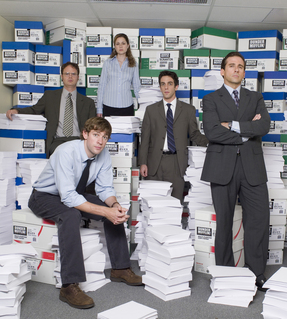 Tonight's episode of "The Office": "The Return"

Oscar returns from his long vacation with mixed emotions on whether or not he still wants to be a part of the office.

Here are my favorite singles* released in 2006. They are unranked, except for the first one, which easily gets the top spot.


Christina Aguilera - "Ain't No Other Man" Still drrrty, but at least she looks a bit cleaner. The excellent production makes me forget about her oversinging.


The Raconteurs - "Steady As She Goes" Sure, they should kick some cash Joe Jackson's way, but this is the best rock track of the year, hands down.


Katie Melua - "Nine Million Bicycles" Should I get married, this song'll be played at the reception. And if I'm lucky, I'll marry Katie.


Amy Winehouse - "Rehab" The anthem for our generation? Maybe.


Belle & Sebastian - "Funny Little Frog" "I had a conversation with you at night/it's a little one-sided, but that's alright." I love this band.


The Pipettes - "Pull Shapes" Prepare for the second coming of the wall of sound girl groups.


My Chemical Romance - "Welcome to the Black Parade" Ever wonder what it would sound like if you put emo, Queen, U2, and Pink Floyd in a blender?


Tilly and the Wall - "Rainbows in the Dark" All bands should use a tap dancer as percussion. Okay, maybe not, but it works for them.


Mates of State - "Fraud in the 80's" They say husbands and wives shouldn't work together. Introducing the exception to the rule. Definitely one of the best videos of the year.

And "Crazy" by Gnarls Barkley wasn't bad, either (by law, that song must be included on all Best of 2006 lists).

Email ThisBlogThis!Share to TwitterShare to FacebookShare to Pinterest
Labels: Best of, music, YouTubery

A hypothetical scenario came up at work today: who would win in a fight between Forrest Gump and Sling Blade?

Sure, Gump is fast, but Sling Blade probably has greater Retard Strength.

Email ThisBlogThis!Share to TwitterShare to FacebookShare to Pinterest
Labels: questions

From the makers of that other evil little game... 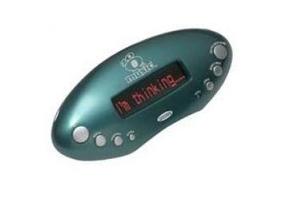 First came the original 20Q, which WOULD NOT GET OUT OF MY HEAD. Now comes along 20Q Music and it's pretty nifty, too. But not as evil.

It did not guess these, though:
Ben Folds
Lou Reed
The Kinks
Better Than Ezra
Neil Diamond
Weezer

1. Thank You For Smoking: I've pretty much covered my love of this film ad nauseum here on the blog, so just go see it.
2. United 93: A movie that everyone should see, whether they think it's the "right time" or not. It's a chilling reminder that yes, Virginia, there is a real enemy out there.
3. The Departed: Scorsese returns to form after the disappointment (to me, at least) that was The Aviator. Jack owns this movie. But next time ditch Leo, okay Marty?
4. Clerks II: I was prepared to be let down, but this ended up being the funniest movie of the year. Now I'm really curious about Kevin Smith's planned horror movie.
5. Rocky Balboa: The plot could have been - okay, actually is - ridiculous, but Stallone handles his duties (star, writer, director) well, making you once again root for the now-60 year old underdog.
6. Borat: The rare case where the hype actually delivers. Really funny. When analyzing this film, I tend to fall in the "Americans are just polite and accomodating" camp rather than the "Americans are all racists, sexist, homophobes" group.
7. Mission: Impossible III: The year's best action flick, Xenu be damned.
8. X-Men: The Last Stand: The year's best comic book flick, Superman be damned.
9. Idiocracy: The movie Fox didn't want you to see. A great commentary on dysgenics, dumbed down culture, and over-corporatization. Plus, it's funny, too. And it has electrolytes (it's what plants crave).
10. The Prestige and The Pursuit of Happyness: I couldn't decide on the tenth spot, so I'll let overwhelmingly grim duke it out with emotionally manipulative.

Biggest disappointments:
1. For Your Consideration: This was made by the same team that gave us Best in Show, Waiting for Guffman, and A Mighty Wind? Really?
2. Superman Returns: I love the character, but this was way too long with not enough action. Plus, Supes was kind of creepy in it. Must ALL heroes exhibit a "dark side" nowadays? Let the dude be a Boy Scout like he's supposed to be and keep the brooding with Batman.
3. Pirates of the Caribbean: Dead Man's Chest: I love the first movie, but this was way too long with too much action. I know that this is merely a second act, but I hope this year's installment can redeem it (and with Chow Yun-Fat AND Keith Richards, I'm thinking it just may).

I have yet to see a lot of movies on my Movie List (Apocolypto, Casino Royale, etc.), so that explains their absence from consideration.
Posted by Micah at 12:10 AM 4 comments: 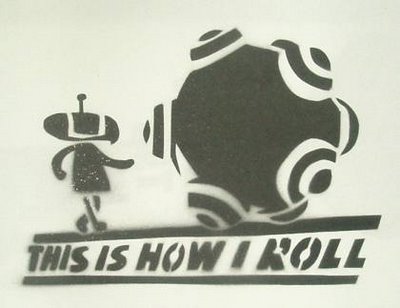 There've been no changes or additions from my mid-year rankings because, well, I haven't bought any games since then (as with books, I usually wait until games come down in price). But I have enjoyed watching my nephews getting all tired playing some games - Call of Duty 3, Zelda, Rayman Raving Rabbits - on their Wii.
Posted by Micah at 10:46 AM No comments:

Email ThisBlogThis!Share to TwitterShare to FacebookShare to Pinterest
Labels: Best of, video games 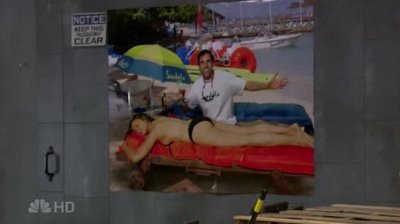 Michael has the staffers pair up and venture out into the field for sales calls.

Requiem for a culinary genius 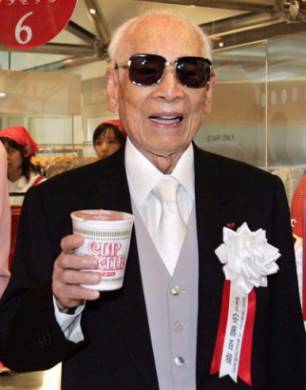 By inventing instant ramen, you've saved me thousands of dollars over the years, friend.
Posted by Micah at 6:59 PM 2 comments: 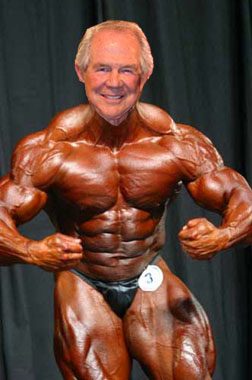 Photoshopped pic swiped from somewhere on the web.

Forget Iraq and the Democrats reclaiming Congress. The News Story of the Year is Pat Robertson claiming to be able to do a 2000 pound leg press.

Email ThisBlogThis!Share to TwitterShare to FacebookShare to Pinterest
Labels: Best of, news, religion 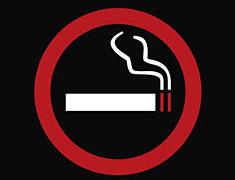 1. Thank You For Smoking by Christopher Buckley
2. The Zombie Survival Guide by Max Brooks
3. The Da Vinci Code by Dan Brown
4. Walk On: The Spiritual Journey of U2 by Steve Stockman
5. The Shroud of the Thwacker by Chris Elliott
6. Term Limits by Vince Flynn
7. Politicians, Partisans, and Parasites: My Adventures in Cable News by Tucker Carlson
8. Vertical Run by Joseph Garber

As I mentioned in my mid-year rankings post, this list contains no books published in 2006 because: a) I rarely buy books right when they are published; b) I have a HUGE reading pile; and c) I'm a pretty slow reader. But the above is what I read - and dug - this past year.
Posted by Micah at 8:35 PM 2 comments:

Email ThisBlogThis!Share to TwitterShare to FacebookShare to Pinterest
Labels: Best of, Books 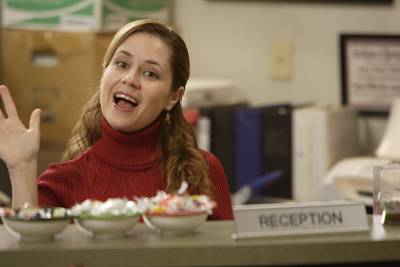 Hello to you, Pam.

Tonight's episode of "The Office": "Back From Vacation"

Michael returns from his Jamaican vacation with an interesting photograph which circulates the office.

Happy New Year's, if you celebrate that sort of thing...which I tend not to. Sorry for my absence. I took a little siesta from blogging. And I just finished watching United 93 (again) and am not really in the mood to do much else tonight.

Editor: "I just had a thought. We're looking for a new food critic. Someone who doesn't immediately poo-poo everything he eats."
Homer: "No, it usually takes a few hours."

But fear not. This week I plan on unveiling my picks for the Best of 2006 in music, movies, books, and whatever else I can think of. Plus, I'll select my Crush of the Year. But, really, who could fill 2005 CotY Scarlett Johansson's very big...shoes?

So, be on the lookout this week for your regular MW fix, folks. I'm hitting the sack.
Posted by Micah at 10:42 PM 21 comments: