Hey, folks. I'm back from my seasonal breather from the ol' blog. Miss me?

Florida was a lot of fun. I could go on at length about Hemingway's house*, excellent Cuban food, or how everyone down there is seemingly attached to cell phones at all times. But I won't, since there's only one thing that begs notice: the elusive Caveman Valkyrie has finally been photographed. 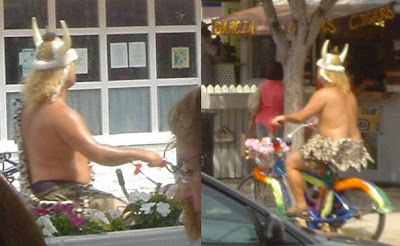 On our last day in Key West, we spotted this dude wearing only a caveman outfit and a viking helmet...riding a fuzzy, rainbow colored bicycle...while chomping down on a cigar. He continously rode up and down Duval Street, probably for the benefit of us touristas. And I had an epiphany as to how to get out of my career slump: I will become his understudy. Why not? Key West's a cool place. His "job" can't be too stressful. And I'll easily avoid my law school student loans by assuming an alias (my first choice: Florian Henckel von Donnersmarck).

After brainstorming over a fine lunch (roasted pork sandwich, fries, Red Stripe, key lime pie), my friends and I came up with my own disparate wardrobe combination: kilt, tri-cornered hat, and pipe. And I will cruise in either a motorized Razor scooter or a three wheeled taxi bike.

I am so out of here.

Alright, a few more choice pictures from my trip... 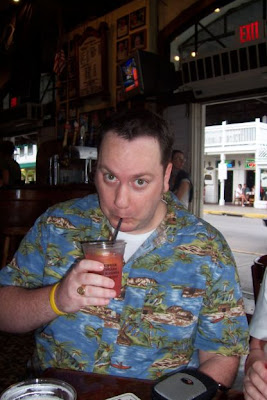 Me enjoying a Papa Dobles at Sloppy Joe's. 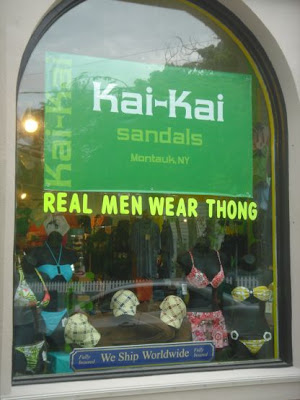 This needs no caption. 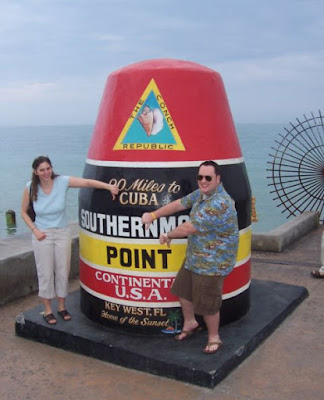 Criticizing Castro's Communist regime (not the fine people of Cuba) with KPMD.

To those in the know, I'll post all of my pics at the usual place later on this week.

*I now have yet another qualification to look for in a future mate: a desire - or at least a willingness - to get married by a Hemingway look-alike at Papa's home.
Posted by Micah at 9:12 PM

I'm not sure how to transcribe the laser-like sound that I made to alert the party to attractive women...so pretend I just wrote it.

Florian, I assume your outfit will include no shirt, or at most a deerskin vest.

I would share pictures of my trip to Vegas with you, but I don't have a camera, so I must carry around the images of the Treasure Island pirate ship girls in my head.

that would be sooo hot, micah. especially in open-toed sandals with calf-length white socks. and maybe camel-skin jacket.

dubin - I was thinking more about the kinds of kilt that have sashes. You know...like the ones in Braveheart. I want folks to look at me, not turn their heads in terror and disgust.

The TI experience...cheesy? Yes. Loaded with eye candy? Even more yes. I'm so jealous that you made it out there.

jasdye - What am I...German? I was thinking more along the lines of Gene Simmons KISS boots. But they'd be pretty hot. Maybe Jesus sandals.

Next time, I'm just gonna watch that show with earplugs in....and stand closer to the chick-ship.

I hear there's a Ripley's in Key West.

If you wanna travel in style, gotta go with the Segway.

thedubin - I think you need to go back to Olympic Gardens. And take me with you.

spydrz - I'll take your word for it.

law fairy - I think only GOB could look cool on one of those.

Micah, it is my solemn vow that I will not go back to The O.G. without you. I hear someone lost a purse.

if you ride the segway, you get an automatic pass to yell out, "Come On!" and do the clucking chicken dance.

dubin - Then we must find that purse ASAP. To the TittyBarMobile!

jasdye - COME ON! Oh, wait. Guess I need to get that Segway first. Or star in Let's Go To Prison.