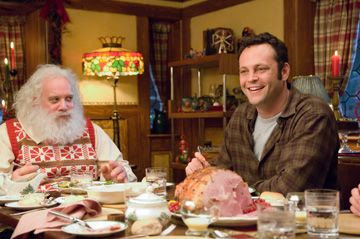 Fred Claus: A passable holiday movie, but nowhere near a modern classic like Elf. It was actually kind of weird seeing Vince Vaughn doing his Vince Vaughn thing, only toned down for the kiddies. Highlight of the movie: Elizabeth Banks in a sexy Santa outfit.

Hitman: More like Shitman. Okay, that was too easy. I got a free ticket to this with my Live Free or Die Hard DVD. Let's just say that I'm glad that I didn't pay for it. If they must make movies based on video games, why not adapt "Katamari Damacy"? That'd be wicked awesome.

Knocked Up: Worthy of the hype.

Transformers: Michael Bay raped my childhood. A movie about giant robots beating the snot out of each other could have been cool in the hands of a different director. Maybe one that lingered on a shot for more than five seconds or cared about the terrible dialogue in the script. And I didn't buy Megan Fox as a teenager.

Blades of Glory: I don't remember much about this one except that I laughed, but not as much as I usually do at Will Ferrell movies. That and Jenna Fischer is fine.

Grindhouse: Planet Terror/Death Proof: I really regret not seeing this in the theaters, with all of the fake trailers and whatnot. Initially, I thought that the whole machine-gun-for-a-leg thing was extremely stupid (actually, I still do), but Planet Terror was fast-paced, splattery and over the top...and I loved it. As for Death Proof, a line from Billy Madison sums up my feelings: "Talky, talky. No more talky." I wanted practically every long-winded character in this movie to die. Kurt Russell was great in it, though.

Year of the Dog: Cute flick. And Molly Shannon was actually tolerable in this, although I did want to slap her character silly. Two of my favorite actors - John C. Reilly and Peter Sarsgaard - gave fine performances.

Why, exactly, did you see Wild Hogs?

It's what happens when you let Mom in charge of the movie rentals.

I'm not sure that I've ever seen a Michael Bay movie. He just makes me think of this:

YouTube is blocked here at work, so I'll have to check that video out tonight. But consider yourself lucky. Sure, I dig "The Rock" and the battle scenes of "Pearl Harbor", but overall his movies are cheesy, steaming loads.

you enjoyed parts of Pearl Harbor but you think he destroyed the Transformers?

micah, you ignorant slut, gimme a break. they finally found a movie perfect for him, one that doesn't bastardize a national travesty (thank God they didn't let him near Flight 93 or the Twin Towers or something) yet is a perfectly cheesebally all-balls-out-summer-bombast and you complain? did you want him to Ang Lee this Hulk? this just doesn't make sense.

on another note, Hitman does look like a piece of 'wanna-be-Luc-Bresson' computer-animated s*h*i*t.

Well, to be honest, my expectations for Transformers was extremely low. Bay's movies tend to suck in the usual ways (ADD editing, terrible dialogue, etc.), but this time he added extreme close-ups during action scenes, so you can't tell what the heck is going on. Overall, TF was just plain stoopid. But, you are right that it is silly to complain about a movie like this. And I actually dug the attack scene in Pearl Harbor...the trite love triangle and everything else, not so much.

Ang Lee's Hulk was also flawed: too much set up and pyschologial gobbledy-gook, not enough Hulk Smash.

There can be a middle ground for summer popcorn flicks. Just look at the Bourne movies (my only criticism with them is the camera work in the Greengrass ones). Smart and action packed.

Hitman was crap, despite all of the violence and boobies.

Speaking of Luc Besson, can you believe that I've never seen The Professional? I need to remedy that.

and TF did suffer tremendously from those manic quick-edit close- ups - which screwed w/ my head and understanding of the plot.

but the crappy, entendre-laden script was only slightly overblown for the type of movie it was, imho.