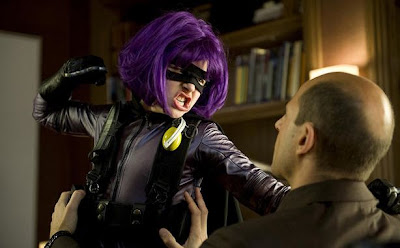 Kick Ass: To avoid the obvious positive evaluation of this movie, let me just say it walloped my derrière. Chloe Moretz as the foul-mouthed Hit Girl was the film's highlight, followed closely by Nic Cage's Adam West-channeling Big Daddy. As for the titular character, I haven't seen a costumed crimefighter so bumbling since "The Greatest American Hero". This was simply a fun time as the movies, but it's not for the faint of heart. Kick Ass revels in the old ultraviolence.

I Love You, Man: I was a bit let down by this. It was funny - and twisting the romantic comedy formula by having the story focus on two heterosexual men was inspired - but not as hilarious as I had expected it to be. Paul Rudd was great, as usual. His status as my mancrush remains unchanged.

The Foot Fist Way: Another disappointment. I love Danny McBride and think "Eastbound & Down" is simply brilliant, but this just didn't click for me. I think I know why: McBride was missing the source of his comedic powers, his signature mullet.

Role Models: Now, this one lived up to the hype. Hilarious. You know, usually I despise it when adorable moppets take center stage in a comedy (or any film, actually), but if you really nerd them up or make them talk like a sailor on shore leave, then they can be tolerable. Paul Rudd is still the man. And it’s always open season for making fun of LARPers. Lightning bolt! Lightning bolt!
Posted by Micah at 9:45 AM