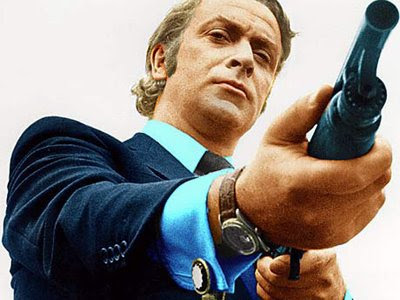 Get Carter: Thanks to my newfound obsession with the books from Hard Case Crime, I'm actively seeking out all things crime noir: tough men, femme fatales, P.I.s, grittiness, cons, heists, revenge, and lax attitudes towards cigarette smoking. So naturally I had to watch Get Carter. Though the pace would best be described as "simmering", who knew that Michael Caine was such a bad ass back in the early '70s? Certainly not me, since I was only familiar with him in such pictures as Dirty Rotten Scoundrels, Goldmember, and, uh, Jaws: The Revenge. Caine takes the names of those responsible for his brother's death and then extracts his vengeance, scoring with the ladies in the process. Awesome.

Point Blank: Lee Marvin's bad assness has never been in doubt, however. In this 1967 film based on Donald E. Westlake's novel The Hunter, he plays a baddie working up a syndicate's chain, wreaking havoc on the even worse baddies who betrayed him, including Archie Bunker, Dean Wormer, and Doogie Howser's dad. Angie Dickinson is there for hip '60s eye candy. It was a fast paced and enjoyable flick with some surprising art house touches. Plus, this Point Blank is 100% Keanu-free.

Payback: Also based on The Hunter, Payback is a movie I caught on video when it first came out in 1999, but it didn't make much of an impression on me then. Well, that's not entirely true, because I remember the blue hue of the film sticking out, since that was kind of new in mainstream movies those days. After revisiting it, though, I've come to like it even more. In addition to the action being brutal, the performances are solid, and the dialogue's pretty funny. Repeatedly the "bad guys" (in quotes because Mel Gibson's Parker isn't exactly a Boy Scout) mention Parker demanding the whole amount ($140,000) from the job in which he was double crossed and left for dead, and he'll exasperatedly correct them, saying that he just wants his cut of $70,000. I've heard that the director's cut is an entirely different beast (natural color palette, new score, no narration, different ending, 10 minutes shorter) and I look forward to seeking that out for comparison.

Okay, kiddos. What other films in a similar vein should I check out?
Posted by Micah at 10:05 AM

Check out 'The Limey'. Terrance Stamp is a Cockney thug who gets out of prison, then flies to California to find out how his estranged daughter died. Awesome.

Own it. Love it. Thanks, though.