"And the Oscar goes to...Bucky Larson: Born To Be A Star!" 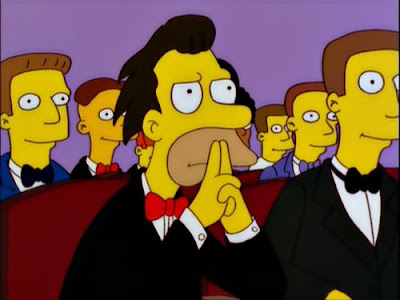 It's time once again for the glitzy annual Hollywood circle jerk that is the Oscars. Just who will reign supreme this year? The tale of a majestic animal in a time of battle (Hugo), the pretentious and meandering arthouse film (The Descendents), the cloying 9/11 drama (Moneyball), or one of the six other flicks?

Of the Best Picture nominees, I've only seen two and a half. I really enjoyed Moneyball. I was more lukewarm on Midnight in Paris since I'm no fan of Woody Allen or when actors stand in for him (sorry, Owen). This afternoon I gave that glorified screensaver The Tree of Life a chance, but shortly after the dinosaurs appeared I checked out. Maybe in my golden years when I'm all hopped up on medicinal marijuana, I'll give it another shot.

Two films from 2011 that I thought were great, but got absolutely no Oscar love are Win Win (in my heart, the National's "Think You Can Wait" won Best Song) and Submarine. Do check them out.

Some are ragging on the Academy for bringing Billy Crystal back to host, but can you really blame them after the disaster that was last year? There's a right way to hip things up and a wrong way. Let's just call this a rebuilding year.

Oscar talk just wouldn't be the same without a little fashion. I couldn't give a hoot about all that (right now I'm watching last night's "Portlandia"), but here's who I'm wearing tonight: shirt by Jean-Jacques Shirt del Woot, pants by Armand Champion, hoodie by House of Old Navy, and slippers by Georgio Dockers.

I'll be live blogging the awards in the comment section. Swing by and tell me who you're wearing, give me your thoughts on the nominated films and performances, take the celebrities down a peg, tear apart the ceremony, or just say hi.
Posted by Micah at 7:38 PM

Can't wait for your commentary.

Thanks, Gretchen. Who are you wearing?

And the fun begins!

Julie, WHO ARE YOU WEARING?!

I think this would be funnier if I had seen more of the Best Pic films.

Oh, man. I really have missed Billy Crystal's Sammy impression. No snark. Loved it when I was growing up. Maybe he'll pull out his Ali tonight.

Billy as Tintin is almost as frightening as creepy CGI tintin.

Woo hoo! Hopefully Lenka's getting a few bucks for Billy appropriating "The Show". No, that little girl in Moneyball didn't come up with song.

That was nice and all, but I'd still rather have the Muppets sing.

Finally. Italy has an Oscar.

who was that lady?

That was Mrs. Italy, Julie.

I really didn't have a desire to watch GCB, but I am a huge fan of Kristen Chenowith's breasts, so I may have to check them, er, it out.

Doesn't the ceremony celebrate the movies every freakin' year? Plaaaayed out.

No love for Captain America's costume design. They made him look believable, dammit! (Really, all it took was getting rid of the tiny wings on his head, but still..)

Adam Sandler wants to "do" Sean Connery's chest hair? What?

- sorry I was distracted. Where was I?

If this was last year's ceremony, they would've tried to hip it up with a dubstep DJ in the balcony.

I love Christopher Guest. Please make another movie. I forgive you for For Your Consideration.

Wait a sec. It's not Transformers: Dark SIDE of the Moon? No wonder it wouldn't sync up with the album.

If Cirque du Soleil really wants to reenact what it's like to go to the movies, they have to incorporate cell phones, incessant talkers, sticky floors, and the second mortgage one has to take out to buy tickets.

RDJ still has his Tony Stark facial hair. I guess he's doing reshoots. Or maybe he IS Iron Man.

I'm getting used to Christ Rock's longer hair. And I still have yet to see his Good Hair doc. It's been on my list for a long time now.

No, Chris, stay on stage and co-host. PLEASE.

Pixar's snub is karma for choosing to do a sequel for Cars and not The Incredibles.

Hey, who is that? Anonymous, announce thyself. Who are thee wearing?

Is Emma Stone a giant?

I love Emma Stone. No homo.

You just know that they're reprinting the DVD case of Grandma's Boy so it reads "and starring Academy Award nominee Jonah Hill".

BTW, Warrior was much, much better than any MMA movie had a right to be.

Isn't it a law that one of these winners has to get down and do some one armed push ups? Start limbering up, Viola Davis.

Suzann! Who are you wearing?!

I want to see Will and Zack co-host next year. Make it happen, world.

YES! One half of the Conchords is an Oscar winner. Your move, Jemaine.

Whoa. A cover of a minor Men Without Hats hit (minor in that it's not "The Safety Dance")is in a detergent commercial. SELL OUTS!

Someone get Angelina Jolie a sammich post haste! Ugh.

I kind of regret not watching my zombie show tonight.

Is anyone reading this?

Sisters are doing it for themselves.

Unpopular opinion I stand by: Bridesmaids didn't live up to the hype.

When does Michael Douglas' Liberace biopic come out? I really want to see it.

Great. Now we're going to have to rename this one a freedom Oscar.

and I'm wearing the classic designer of footlocker and their grey yoga pants, the ever stylish under armor, black long sleeve tee... it'll be all the rage this coming season! :P

You are the picture of grace, Suzann.

I'm reading. And I thought "Bridesmaids" did live up to the hype. So there.

Is it just me or are the awards pretty boring this year? If I didn't feel obligated to watch this like I do every year, I'd be in bed right now.

Shawn, you ignorant slut. I award you no points. And may God have mercy on your soul.

And thanks for reading.

Okay, now I want Patton Oswalt to host next year. He would rock.

As drop dead beautiful as Natalie Portman is, I just can't get over that she's one of those ear-lobes-attached-to-her-head types. *shudder*

I need to hear some Toby Keith RIGHT NOW.

I want to watch a movie that features multiple rapes. Any suggestions?

The conservative anglophile in me is happy right now.

Okay, so that was a huge upset. Can Captain America: The First Avenger really pull it out?

Artist, Schmartist. Instead, let's all bask in the science dropped in this tweet by Paul F. Tompkins (in regards to Tom Cruise):

Dudes. Don't do the necktie thing with the tuxedo. The bowtie always looks better. Always. Can't tie one? DON'T WEAR A TUXEDO.

The French won three awards tonight. There's a monage a trois joke in there somewhere.

NO CLIP-ONS. Learn how to tie a tie! I'm not asking you to buy a bolt of fabric and MAKE one!

Seriously, guys, it's not that hard to tie one. It just seems that way.

Okay, I'm going to stay up for a few minutes and read some more funny tweets. (Twitter was made for evening like this.) Thanks for reading, if you did. You can tell me who you were wearing in the morning. I love you.

To respond to a tweet from hours ago, Good Hair was good, but (as with many documentaries), I wanted MORE.