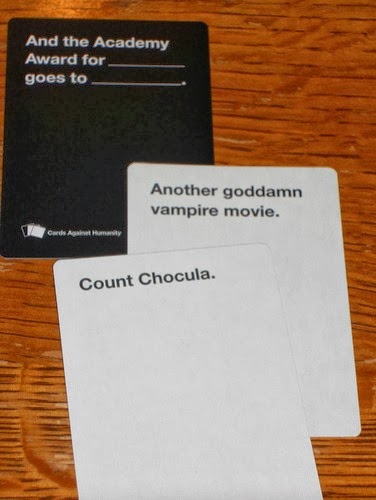 As I do every year, I'll be live blogging in the comments section of this post. Why don't you come on in and join me? The snark is strong in you. I can feel it.
Posted by Micah at 7:14 PM

I wish the Golden Globes and the Oscars switched hosts, considering I only watch the latter. But at least Ellen looks like Sparkly Prince.

I flip flop about whether or not I hate Anne Hathaway. Tonight feels like a hatin' night.

30 Seconds to Mars is only three awards away from getting an EGOT!

Yes, Unknown, it is rough sailing.

I participated in the oscar pool, but you can't actually make me watch them!

Ricky Bobby is on too. Can anyone find Step Brothers for the trifecta?

I could program my own marathon. #dvdowner

You know it's bad when you wish your laundry was done so you could be folding it. That's the boat I'm in right now.

Live tweets I've been following: @Rifftrax and @Esquiremag (Paul F. Tompkins is doing it on the latter). The experts do this much better than me.

So wish I could hear the phrase "Oscar winner Jackass."

My laundry's done! I get to fold laundry!

No thank you for us for saving their butts in Dubya Dubya Two? Pffft.

Why am I not switching over to The Walking Dead right now?

I'd like to be snarky, but I'm really digging this song.

All night on Twitter Paul F. Tompkins has been calling out the "bowtie cowards" who have appeared on stage. I fully support him in his witch hunt. It ain't that hard to tie, fellas.

Enough with the obscure indie rock!

We just started watching, so I'm like two hours behind everybody. This should be fun! We just saw Jared Leto win, and I called it right before he got the award. I told my wife "people who cross-dress always win."

Tell that to the Wayans brothers. White Chicks was robbed!

Thank you, Bill Murray. You are awesome and so was Harold Ramis.

I was told I'd never have to hear "The Wind Beneath My Wings" ever again. LIARS.

Wife: "Pink's got an amazing voice.....but, I'm tired of hearing it." Fast-forwards on the DVR.

I have to say, they mixed in some very questionable "heroes" in that action-flick montage. And by questionable heroes, I mean crappy movies. Wild Wild West?

"What color is John Travolta's hair? It looks purple." -wife

We have a real-life EGOT winner!

Tracy Jordan set the standard for all EGOT winners to follow.

Hey, the guy who directed all the Weezer videos just won an Oscar!

Hey, the guy from "Three Kings" just won an Oscar!

10 people guessed Cate Blanchett in the pool. I call shenanigans.

Does anybody know why Daniel Day-Lewis hyphenates his last name? It sounded so weird when Cate Blanchett said "Thank you Mr. Day-Lewis."

Because he can. He's DD freakin' L.

I love J-Law with all of my heart, but she needs to grow her hair back out.

So, do people basically just pick all the Golden Globe winners in the pool? Why didn't somebody tell me this when I was making my picks this afternoon?

I monitor the buzz and consult other sources like Entertainment Weekly and the AV Club for the lesser categories. Sometimes I win, sometimes I don't.

Steve McQueen looks a lot blacker than last time I saw him.

I CAN FINALLY GO TO BED!

Thanks for hanging out, DeMers. Did you drop these?

Right as my laptop battery is dying. G'night everyone!