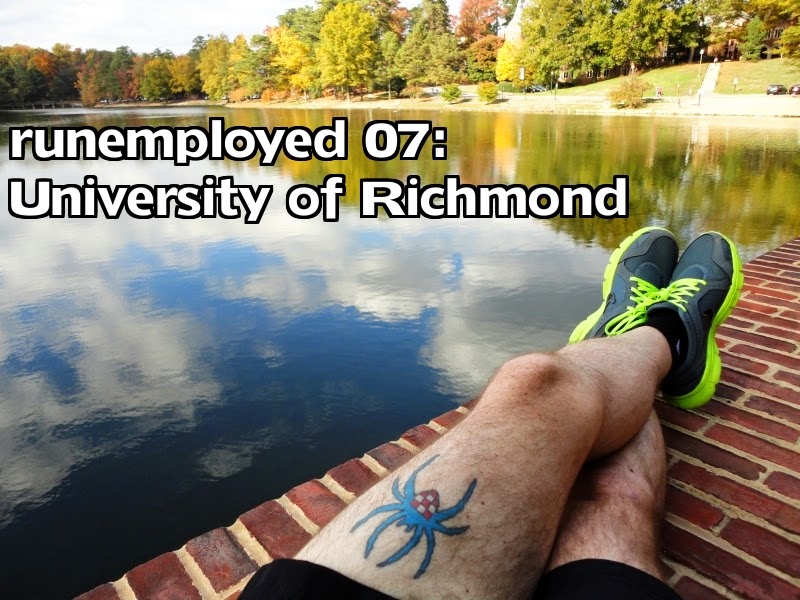 It's been over a month since I've done one of these posts and, honestly, I've really missed getting out there. (Who am I?) See, I had a terrible case of poison ivy - stemming from a bizarre gardening accident - and I didn't want to aggravate my condition while I was recovering. And when I was ready to come back, rain put the kibosh on some of my planned trips. But in that time I became a member of the Richmond Road Runners (No, really, who am I?) and registered for a couple of races in November, bringing the total for that month up to three. (Stop it. You're scaring me.)

I'm back at it now, though, and what better place to resume this series than my alma mater, the University of Richmond?

Though I didn't start matriculating there until 1994, UR was established way back in 1830. (Thank you, Baptists!) I guess some stuff happened before my time, like eventually losing its affiliation with the church and focusing on molding the minds of young men and women decked out in Izod. FUN FACT: while a certain school whose colors are yellow and black has the arrogance to claim to represent the entire city, ours actually has the word Richmond in its name. Plus you have a significantly less chance of getting mugged on our campus. Without a doubt, the best years of my life were spent on these grounds. I made several close, lasting friendships and we generated four years' worth of good memories. Oh, and I learned a few things, too. But one thing I wasn't back in the mid '90s was fit. The "freshman 50" hit me hard. Yes, I really committed to that common curse. You should see our dining facility. The Wall of Cereal alone...
I think I can say with authority that one of the things I never did during my time at Richmond was move at pace faster than "hurried mosey." (Okay, maybe if I was late to class I would break into "rushed amble.") Exercise was not a priority. Considering that I ate a grilled cheese sandwich with every meal, you'd think I'd be mindful of that. Nope. So jogging around campus yesterday provided a point of view that was brand new to me. And that point of view mostly consisted of "Boy, this place sure is hilly." Honestly, I never realized that until doing this run. Sure, Boatwright Drive as you enter campus is steep and twisty, but the other roads on campus never registered that way to me. Earlier this week I signed up to do a 10k here on Thanksgiving morning. What have I gotten myself into?

Back in my day, the two schools that make up the university - Richmond College for the men, Westhampton College for the women - were separated by Westhampton Lake. Yes, it was like summer camp with textbooks and Milwaukee's Best. Unsure if my old restraining order was still in effect, I kept my run pretty much on the RC side.
The loop around the lake is a very pretty run. Bonus points if you enjoy looking at water fowl. Sadly, there were no lake dogs there yesterday. I ran past lots of bricks, fallen leaves, and co-eds that (sadly) look like children to me now. Aside from the lake, everywhere I went seemed like I was going uphill, which I probably was. Next time I'll venture over to the Westhampton side and get a feel for its terrain.
My initial thought for this post's selection from my running playlist was to use a song that was a big part of my college experience. Oh, how I tormented my friends and dormmates with my incessant playing of G. Love & Special Sauce's "Cold Beverage" and Blood, Sweat & Tears' "Spinning Wheel." But this being Halloween time and all, I figured that I should bust out a spooky tune, so I'm going with the Talking Heads' "Psycho Killer." There's no personal significance, just a driving beat that'll keep you going. Pretend you're getting chased by Patrick Bateman!

Psycho killer
Qu'est-ce que c'est
Fa fa fa fa fa fa fa fa fa fa fa better
Run run run run run run run away
They say you can't go home again, but I proved them all wrong. In fact, it was really easy. SUCKERS! It was great seeing UR from a new vantage point and recalling some fond memories while doing so. Richmond is beautiful all year round, but especially in the fall. If you don't mind a bit of a climb, I suggest you get out there and enjoy its rolling hills while they're at Peak Prettiness. I'll be back there early on Thanksgiving morning, banking enough calories for me to eat an entire pumpkin pie later on that day.
Posted by Micah at 2:53 PM