Pixelated Pigskin Prognostications: Championship Round One

It's championship time again in Division 1-AA, er, the Football Championship Subdivision. And Richmond is looking to defend their national title, but the Fightin' Christians Phoenix stands in their way. This is how the Great Xbox 360 Swami sees it going down, via a CPU vs. CPU game: 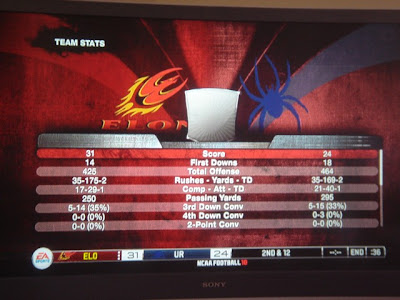 Fret not, because I have it on good authority that the Obama administration has calculated that Richmond will in fact save or create an additional 54 points this afternoon, taking them to a 78-31 victory. You cannot dispute their math.
Posted by Micah at 12:34 PM