"We're sending our love down the well": 8 charity song parodies

The new Haiti-benefiting version of "We Are the World" and its accompanying video premiered several days ago and, as you can imagine, it's pretty freakin' terrible. AutoTune? Really? Good intentions aside, the original song is pure fromage and this update doesn't make it any better. Perusing the list of participants made me feel old. Who are these people? Justin Bieber? Trey Songz? Barbara Streisand?

The 1985 original gave the nation a collective warm fuzzy, but now it's kind of hard to take these songs seriously, due in large part because of all of the benefit song parodies that sprang up in the wake of "Don't They Know It's Christmas" and "We Are the World". Here are some of the best:

Pulp: "Bad Cover Version" - Perhaps my favorite skewering of the charity song paradigm, Britpop legends Pulp decided to pay tribute to themselves by bringing in a who's who of rock and pop luminaries (via look- and sound-alikes) for the hilarious video of their excellent 2002 single. They totally nail the "hey, we're having fun in the studio!" wankery that's usually shown in their more serious counterparts. And I never tire of a good Tom Jones impersonation.

"The Simpsons": "We're Sending Our Love Down a Well" - Bart's "there's a boy trapped in a well" prank goes awry when he actually gets stuck in one and Springfield's celebs (and Sting!) are there to "raise awareness". Pointing out the absurd futility of benefit songs? The Simpsons did it. 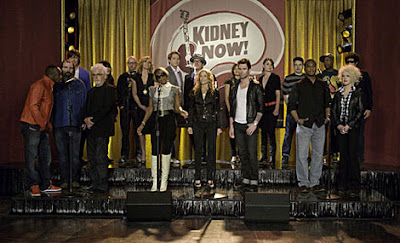 "30 Rock": "Kidney Now!" - In an effort to find a matching kidney donor for his newly discovered biological father, Jack Donaghy arranges a surprisingly hip group of musicians (including Declan McManus, international art thief) for "Kidney Now!". For pure lyrical content, this song tops the list. And Sheryl Crow got paid!

"Weird Al" Yankovic: "Don't Download This Song" - In 2006 cultural/food commentator "Weird Al" Yankovic shed a light on the guilt tripping and shortsightedness of the music industry ("Don't download this song or you'll burn in hell before too long") while simultaneously exposing the ridiculousness of a group of multimillionaires making an empty gesture for charity. And, as with most of his satirical songs, he was right on point.

Tonto, Tarzan, and Frankenstein: "We Are World" - "There choice we make/Saving own lives/To make bright day, you, me." 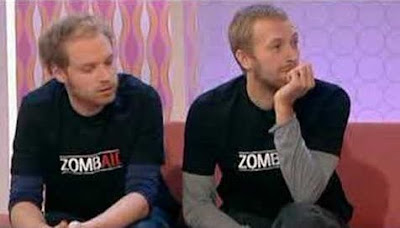 Coldplay: "Zombaid" - Though we never actually see the benefit song performed, Chris Martin and John Buckland of Coldplay very briefly appear in the superb zom-rom-com Shaun of the Dead to promote their cause. I'm glad that after the zombie apocalypse - and mark my words: there will be a zombie apocalypse - there will still be an outlet for celebs to show their generosity. And I still want one of these t-shirts.
Posted by Micah at 10:10 AM

John Bu-- There are other people in Coldplay?

And they have names?

Ha! In preparation for this post, I actually had to look up the non-Chris Martin guy's name.