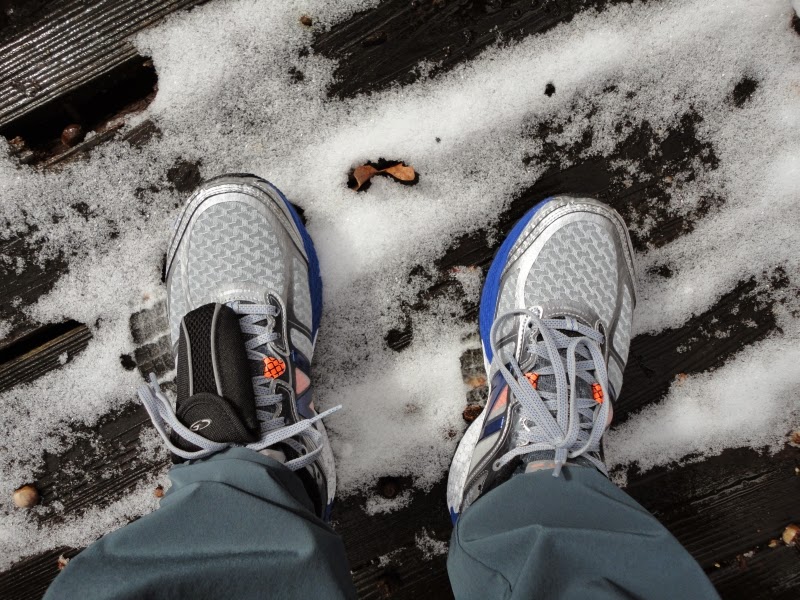 I'm creeping up on it being one year since I started doing this stupid running thing and I guess it's going to stick. Figuring it was about time that I got my first pair of professionally-fitted shoes, I headed to Lucky Foot to get an analysis.

It turns out that my feet collapse inward as I run, setting off a chain reaction of stress in my knee and hip. That explains the pain! All this time I've been running in a pair of neutral shoes, but I actually need stability ones. So I tried on three pairs and settled on these New Balances. Even with a discount for belonging to Gold's Gym, these are the most expensive pair of sneakers I've ever owned. But I guess they do more than sneak.

It's funny: in every other area of footwear I much, much, MUCH prefer something understated and conservative. Yet for running shoes I like to peacock with shoes that are slightly gaudy. (Though I do have my limits.) Honestly, I find my new shoes to be pretty boring. Though here function should trump form, I guess. Still, zzzzzz...

After the snow melted I took my new shoes out for their inaugural run and... I don't know. I went on a four mile run and at mile three my hip was killing me. So much so that I had to walk for about 30 seconds before resuming my run. And my knee still hurts. I can't tell if it's more or less than with my old shoes.

Maybe my body just needs to acclimate to a different type of shoe after getting used to my old neutral pair. Jeff at Lucky Foot did say that they wouldn't be an instant panacea to my problems. I'd also have to build my leg muscles up, as well as stretch adequately before running. So I'll give them a few more runs before I make a final verdict.
Posted by Micah at 4:54 PM

Email ThisBlogThis!Share to TwitterShare to FacebookShare to Pinterest
Labels: running is dumb, shoes