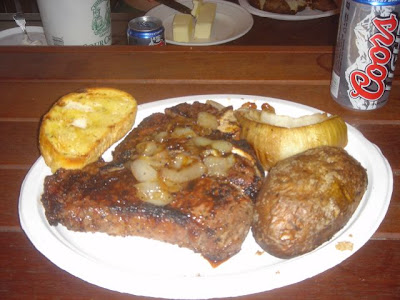 Tuesday was Man Night. While the ladies went to dinner and a show (A Chorus Line), the men stayed in, drank beer, and ate copious amounts of red meat. Grillmaster Uncle Chuck prepared my culinary highlight of the year: steak (1.5" thick! 1.75 lbs.!), baked potato, a whole onion - all grilled on the Weber. There was also some great salad and Texas toast, not to mention Uncle Mike's homemade ice cream.*

Then there was the impromptu after dinner rap-along. Don't ask.

You can keep your 4 star restaurants. I've had my share of haute cuisine (which is nice), but it doesn't get any better than this.

*It was almost like Patton Oswalt's bit about the gauntlet of angry food.
Posted by Micah at 6:35 PM

speaking of patton oswalt and food, have you seen Ratatouille yet?

I love the sticks of butter in the background.

jasdye - No, I'm woefully behind on my summer movie viewing (still want to see Knocked Up, Die Hard, 1408, Fido, etc.). But the Pixar movie tops my list (well, maybe shares the spot with Knocked Up). Funnily enough, on the drive home yesterday I was listening to a podcast interview with Brad Bird and Patton Oswalt and the former said the latter got the role because of that Black Angus bit I linked to in this post.

spydrz - And they tasted good on my potato. There were 11 guys (and two little girls) eating, so copious amounts of sweet, creamery butter were needed.

how can i get ahold of that podcast?

And if you want a half hour long Brad Bird interview, get KCRW's The Treatment of 6.27.07.