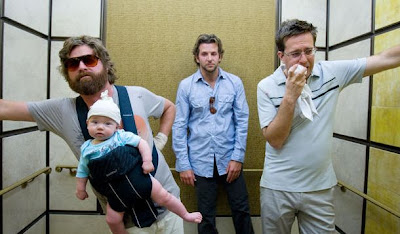 Summer. There is much that I despise about this dreadful season, but there are always several perennial things that I look forward to when the temperatures start to rise: listening to perfect pop songs, seeing women in skimpy clothes, grilling out giant slabs of tasty animal carcasses, drinking Red Stripe beer, napping to televised baseball games on the weekends, wearing flip-flops as my primary footwear, and going to see most of the blockbuster movies.

The loud, candy-coated Summer Movie Season started even earlier this year, with the just-okay X-Men Origins: Wolverine kicking things off last weekend. It was a fun yet middling beginning to my film-a-weekend habit that'll become a seasonal fixture until September. Armed with a dog-eared copy of Entertainment Weekly and PopMatters' own summer movie preview, I noted the movies that I anticipate the most over the next few months. Now, I'm under no illusion that I'll see all of them right away, if at all (heck, I still have yet to see WALL-E), as ticket prices are ridiculous* and my entertainment budget can be stretched only so far. I'll likely put some of these on the backburner as word of mouth and reviews come in and the money set aside for booze and meat swells, to the detriment of other areas in my budget. (Sorry, personal hygiene.)

But, in a perfect world, I'd see all of these on opening night this summer (in order of release):

Star Trek (May 8): I am by no means a Trekkie. I've never seen a full episode or movie in the series. So what, besides the promise of 'splosions aplenty, will get my butt in the seat for this installment? Simon Pegg as Scotty and Diora Baird as a sexy green alien babe. 'Nuff said.

Angels & Demons (May 15): I didn't think The Da Vinci Code was all that bad - well, aside from Tom Hanks' terrible 'do - and my favorite conspiracy theory is the Illuminati (not that I believe it; it's just fun to think about), so I'm down. Plus, Ewan McGregor's the man.

Terminator Salvation (May 22): The Terminator franchise is so ingrained in my formative moviegoing years that I'm pretty much obligated to catch this latest outing, even though my feelings a mixed about it. Pro: it stars Christian "Oh, gooooood for you" Bale. Con: It is directed by McG.

Up (May 29): Hearing about the plot, I wasn't sold on Pixar's latest. But after seeing the trailer, I'm really looking forward to this.

Drag Me to Hell (May 29): Sam Raimi returns to the horror realm. But I'm a wuss, so I'll likely watch this on DVD…on a Saturday afternoon…and with all of the lights on in the house.

Land of the Lost (June 5): After "Eastbound & Down," Pineapple Express, and Tropic Thunder, I'm an unabashed Danny McBride fan, so I'll give this a go.

The Hangover (June 5): It's got three of my faves (Ed Helms, Zach Galifianakis, and Bradley Cooper), is directed by the guy behind Old School and Road Trip, and is about a missing groom in Las Vegas. I think this is my most anticipated comedy this summer.

Away We Go (June 5): This latest comedy from Sam "The suburbs are evil!" Mendes sounds iffy, but I'm curious to see "The Office's" Jim in a beard.

Whatever Works (June 19): Woody Allen? Not a fan. But I do like Larry David a lot.

Public Enemies (July 3): Solely because of the bank robbery scene in Heat, I have full faith in director Michael Mann to pull off this John Dillinger biopic. The fact that Johnny Depp and Christian Bale are in it is just icing on the cake.

Funny People (July 31): The latest movie directed by Judd Apatow looks like it will be heavier on the drama than his previous efforts. After catching Reign Over Me again this week, I think Adam Sandler will be up for the task.

G.I. Joe: The Rise of Cobra (August 7): I should know better, after 2007's terrible Transformers flick, but I still have a morbid curiosity about live action films based on toys that I played with as a kid.

Inglorious Bastards (August 21): I'll believe that Quentin Tarantino's long-in-the-works film - about a group of Jewish soldiers laying the smack down on a bunch of Nazis - actually exists when I see the opening credits roll.

The Boat That Rocked (August 28): This tale about 1960s seabound English pirate radio has Philip Seymour Hoffman and Bill Nighy, and a good pedigree (the same writer/director of Notting Hill and Love, Actually), but what really puts this over the top for me is the inclusion of Nick Frost.

And please, for the love of Pete, brush up on your movie theater etiquette before catching a flick this summer (if you need it).

*Luckily, concession prices don't even enter into the equation. Thanks, Dollar Tree and cargo shorts!
Posted by Micah at 11:01 AM

before i read this post - is that an updated 3 men and a baby?

All that's missing is a little lady!

zack g. is tom selleck. then andy bernard would be steve guttenberg, heir to the printing press fortune.

holy...! did you know that Spock directed the original? that's just so not logical.