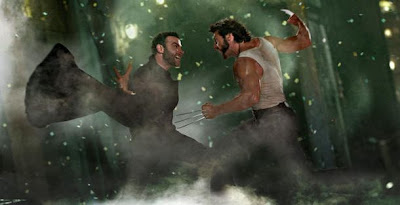 X-Men Origins: Wolverine: The summer movie season kicked off with Wolverine and his own feature is exactly how I anticipated it to be: not great, not terrible, just an enjoyable flick. Sure, the dialogue isn't too hot and some of the CGI is iffy (most notably Wolvie's claws in some parts), but the casting is on spot. Hugh Jackman gives it the ol' mutant try again, Liev Schreiber makes for a menacing Sabretooth, and MW Official Co-Man Crush* Ryan Reynolds is perfect in the Deadpool role. I just wish he was in it more. I'll spare y'all the "that's not how it was in the comics" bitchin' that's de rigueur for comic book adaptions, though. This movie serves as a satisfying appetizer for likely better summer spectacles to come.

Punisher: War Zone: A brutal, unrelenting carnival of mayhem. I'm not always in the mood for this type of movie, but when I do get that itch, Frank Castle will be there to scratch me. And then blow my freakin' head off with a rocket launcher. (For an entertaining read, check out Patton Oswalt's blog post where he includes this in the "Is This Happening?" Movie Club).

*He shares the title with Paul Rudd.
Posted by Micah at 10:55 AM

I of course was immediately disturbed by the opening scene of Wolverine. To think they could've just gone to Wikipedia to find out that Canada didn't exist in 1845 and indeed wasn't formed until 1867...

Good catch Spydrz...I missed that one. Nevertheless, it was an entertaining movie. I am no Comic Book Guy, but I found that, having seen the other X-Men flicks, I knew enough for the plot to make sense.

spydrz - Yeah, after that I didn't believe anything this movie was selling. Claws coming out of a dude's knuckles? Suuuuuuuuure.

Dubin - It did seem like some prior knowledge of the other X-movies was required, but that's probably par for the course in a fourth installment of a series.