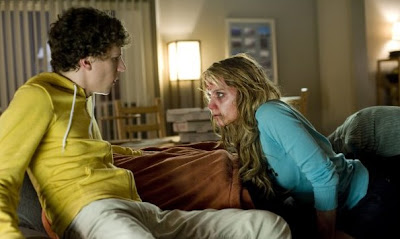 Zombieland: I had a blast with this one. It's funny and Woody Harrelson is a trip. It's refreshing to get a zombie flick that goes balls-out with the laughs and kills and isn't weighted down with heavy-handed social commentary (I'm looking at you, late period Romero). Plus, it has one of the best opening credit sequences in recent memory, next to Watchmen*. And I won't spill the beans about the Big Cameo like Letterman did (Arrrrrgh! RAGE!), but that alone is worth the price of admission.

Inglorious Basterds: Loved it! Sure, it could use some trimming, but what Tarantino film can't (don't get me started on Death Proof)? I've got to give him credit: the dude even managed to somehow work his creepy foot fetish into a WWII flick. Honestly, from the marketing I expected this to focus on each individual Basterd and their contributions to the plan, but it didn't. And that's okay. There are two tremendously tense (and long) scenes that are just purely great filmmaking. If there's any justice, Christoph Waltz, portrayal of a charming yet menacing Nazi should win him an Oscar.

Let the Right One In: This Swedish vampire movie isn't particularly scary, but it is beautifully shot and acted. I'd classify the film as more of a coming of age tale with some unnerving scenes thrown in. This is a great one to watch while the temperatures outside drop.

Plan 9 From Outer Space (Rifftrax version): Somehow I managed to live my entire life without seeing The Best Bad Movie Ever until this past August. Boy, it really is a terrible movie - and perfect fodder for the former MSTies at Rifftrax to mine for snarky comedy. I saw this when they riffed on the movie in front of a live audience back in August and there'll be an encore presentation beamed into theaters tomorrow. Check it out. It's hilarious.

*Though not as brilliant as the opening of the Dawn of the Dead remake. What is it with zombie flicks are great credit sequences?
Posted by Micah at 10:35 AM

It's settled then. I'm going to see Inglorious Bastards. But is it "too violent?" Kill Bill v1 and 2? I liked them a lot but it was more theatrical than violent. Thoughts?

Hard to say, since that's a really subjective call to make. The movie's violent, but not nearly as violent as I had anticipated. There are a few shots of the Basterds scalping some Nazis and some other stuff that I won't spoil. It's graphic, but also kind of cartoonish in its over the top-ness.

The amount of violence is nowhere near what was in "Kill Bill Vol. 1", though (haven't seen Vol. 2 yet). Just practice your wincing and looking away skills beforehand and you'll be fine. :)

Seriously, Christoph Waltz was excellent in this and you could tell Brad Pitt was really having fun in his role. There are some very tense scenes that are instant classics, IMO.

I'm sold then, going to watch it. Thanks.