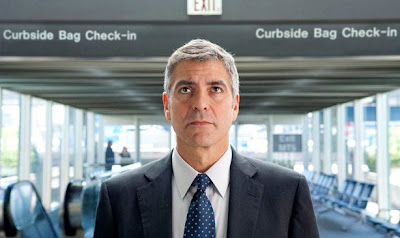 Up in the Air: George Clooney plays a professional downsizer and aspiring motivational speaker who only feels at home while on his quest to accumulate 10 million frequent flyer miles. His company hires an ambitious wunderkind whose cost efficient idea to fire people via the internet threatens to make Clooney obsolete, so he takes her on a cross country trip to show her that his line of work requires a personal touch. In return she - along with a fellow professional flyer that he's been periodically hooking up with - shows him that his detachment from his family and lack of a permanent home is not any way to live.

Clooney turns in another fine Clooney-esque performance. Vera Farmiga's sublime buttocks and Anna Kendrick also do well in their roles. Director Jason Reitman crafts yet another great movie*, though it may be a tough watch for some people, given their circumstances as a result of this economy. For everyone else, though, this one enjoyable flick.

*True, I absolutely HATED the dialogue in Juno, but every other aspect of that film is above par. Honest to blog. And I can't heap enough praise onto the terrific Thank You For Smoking
Posted by Micah at 10:15 AM