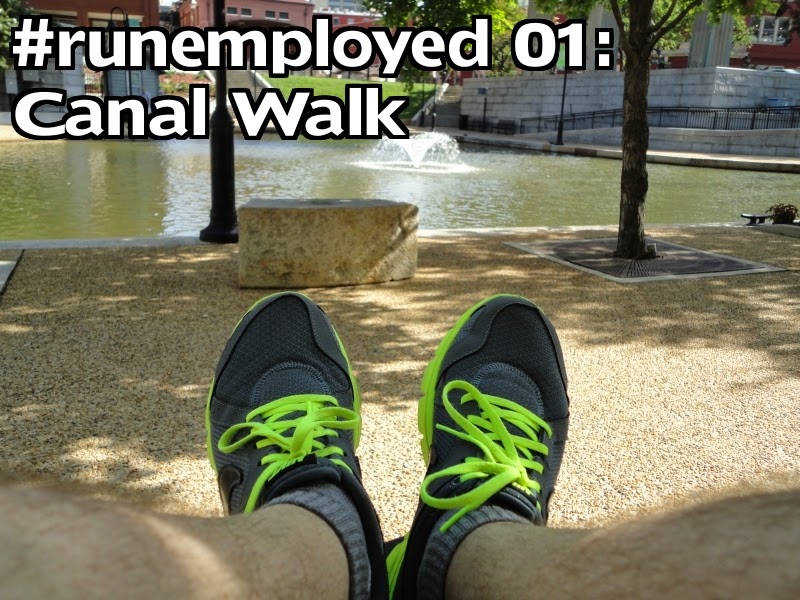 Since my job was phased out last week I suddenly have a lot of free time on my hands. I don't want to sit around watching Netflix all day. Scratch that. I do want to do that, but it wouldn't be very productive. After the stress of combing through job listings and putting together cover letters, I need an outlet to release my frustrations. And given my current situation, it has to be cheap. Enter running.

I hate running. Well, that word may be a bit too strong, but I don't enjoy it very much. I do like to eat, though, so you gotta do what you gotta do. I'm getting kind of bored on my suburban route, so why not check out some parks and neighborhoods around Richmond? At least there'll be a better likelihood of eye candy out and about there.

Though summer is unofficially over, you wouldn't know it. It's hot as balls out. Given that, my first journey was a short one: the 1.25 mile path around Canal Walk.

So I loaded up my running playlist and hit the path. The first song that randomly popped up? Modest Mouse's 2004 breakthrough "Float On." That seemed like an apt choice for keeping positive during this phase of my life. It's funny how things like that happen.

Bad news comes, don't you worry even when it lands
Good news will work its way to all them plans
We both got fired on exactly the same day
Well, we'll float on, good news is on the way


And it was indeed a short run. I was expecting it to be a bit longer, but nope. The path is scenic along the canal and it was pretty empty around 9 am, save for a couple of cuties out jogging and a few homeless guys on the fringes. It wasn't as humid as I expected, so I decided to extend my run down Dock Street on the path that runs parallel to the elevated railroad tracks and then turn back and do the Canal Walk loop again.

That was the plan until I entered back onto the Canal Walk, hit a grate, and BOOM. Wipe out. I may have been a bit distracted, but it happened so quickly I can't remember what caused me to hit the pavement. So I'm placing full responsibility on that grate.

I figured that since I was now a bloody mess, enough was enough. Plus my earbuds' plug broke in the fall and the only thing worse than running is running without music to distract you from the fact that you're running.

My spill was embarrassing, but I don't think anyone saw me tumble. I did get some looks as I was walking back along the route to take some pictures. (Shameless Instagram plug!) One such person was a woman named Sheila who was walking her dog Weezy.

She offered to let me into her apartment building so I could clean up in the lobby bathroom, which I gladly accepted. Who says that Richmonders are unfriendly? Yes, Virginia, there are still kind people out there. I wish I would've thought to have gotten her full name and address so I can send her a note. Hopefully my thanking her profusely then will suffice.

So this whole endeavor wasn't my most graceful moment, but it was nice to get out, see part of the city, and have my faith in mankind reaffirmed. My friend says that my new battle scars make me a real runner. Um... thanks? Anyway, I'm looking forward to going to the next spot on my map in a few days. Except for the running part.

Don't worry, even if things end up a bit too heavy
We'll all float on alright
Posted by Micah at 2:54 PM