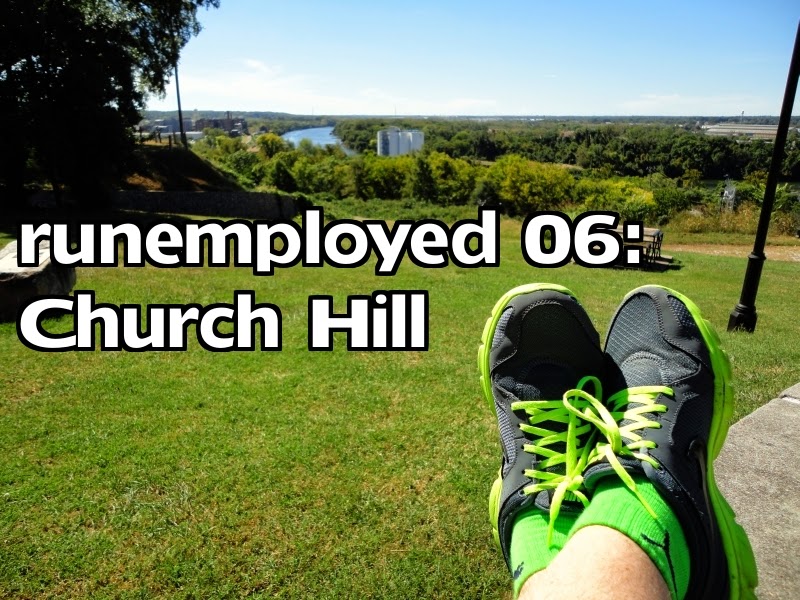 Today was a beautiful day for a jog. Bright yet the air had a crispness to it. Still green, but with none of the drawbacks of summer. Of which there are many. (Yes, I'm a hater.) Why not spend it in the part of town that I've frequented the most, aside from the times I was schooled and resided in the West End? That's right, it was time to go to Church Hill.

Church Hill is a lovely part of Richmond where you'll find old houses owned by people who aren't too keen on new baseball stadiums, some great places to eat and drink, and O.G. patriot Patrick Henry's favorite place of worship. Sections of Church Hill are quite upscale. Others... uh, not so much. Last week I used this space to gush over my friends and this neighborhood has the largest concentration of them, hence my spending copious amounts of time here. Heck, I was even part of a formidable pub trivia team for a while. (The Publicans 4 life, son.)

So, I love this area and figured it was about time that I jogged through it. Over the weekend I went to Chimborazo Park for the first time, to catch a showing of O Brother, Where Art Thou? As I am bona fide, that was a good enough starting place as any for me today.

Chimborazo is a National Battlefield Park, which during the Civil War was the site of the largest military hospital in the world, consisting of 150 buildings and 100 tents. Long gone are the 76,000 patients, but I assume their specters still roam the park, forever trapped on this mortal plane. Or not. The only other entities I saw as I ran through there were a few guys sitting in parked cars. I should've stopped to pick up one rock of crack while I had the chance.

The jog through there itself wasn't bad. Some of the streets are closed to traffic, but the ones that aren't have wide sidewalks that run along them. The loop around the entire park is pretty short, so I continued on to another park a few blocks away.

I made my way to Libby Hill Park next. Here you'll find a spectacular 180 degree view of Richmond. It's said that the city got its name because William Byrd thought the view from this point closely resembled a village west of London called Richmond upon Thames.

As its name implies, Church Hill has got some hills, broseph. I kept away from the major inclines, but still hit some that made me put in some effort. And this is where I found them. Part of the perimeter loop around the park is pretty steep. It mixed things up nicely, though, and kept my run interesting.

This is by far my fastest run since I started logging them with Strava, if not of all time. (Previously I used Runtastic and I think you have to pay extra for that kind of information. Eff that noise.) It could've been the day's weather or possibly the elevation, but I think I pushed it harder than usual because I was running against the wind for the first part of my trip. Whatever it was, I set personal records for my fastest mile and kilometer. Remind me to check the DMV site to see if HOTSHIT is an available license plate.

Being up here gives me a strong itch to get out of the suburbs. Every day my soul dies a little more down there. I need to be around my friends and non-chain dining and interesting sights, sounds, and smells. Which brings me to today's selection from my running playlist: The Killers' "Read My Mind," off of their 2006 sophomore effort Sam's Town. More than any other band currently working, these guys really have a way with a soaring chorus and this is my second favorite number of theirs, right after "All These Things That I Have Done." I think my desire to leave is reflected nicely by the song's narrator.

Having banked some calories and with it being lunchtime, I decided to stick around Church Hill for a bite to eat. My first choice was Proper Pie Co., which I've been wanting to try for a long time now. Savory pies made by a Kiwi? Count me in. Well, it was poor planning on my part because they're closed on Mondays. So I hit up aspiring den of iniquity Capt. Buzzy's Beanery for an iced coffee, a bacon, egg, and cheese on wheat bread, and a chocolate and peanut butter scone. I left full and satisfied. Not bad for a second choice.

It was a great early autumn morning to get out and while I only covered 2.6 miles, I hope to traverse a lot more of Church Hill in the future. Maybe as a resident? We'll see. I could probably find a burnt out townhouse in the sketchier part of the neighborhood that I could squat in. Reduce! Reuse! Recycle!
Posted by Micah at 7:09 PM

They were extremely critical that operators were solely thinking about more worthwhile prospects who sustained bigger losses. While these bettors reported switching to betting exchanges, other Australian research has highlighted that banned gamblers additionally opt to make use of unlawful offshore websites, which limits client safety . Amongst 347 Australian sports or race bettors who had bet with an offshore operator, thirteen.8% 코인카지노 reported “no betting limits or account restrictions” as an advantage of doing so . Thus, banning successful bettors appears to drive some prospects to unlicensed wagering operators who could implement few, if any, harm minimisation measures. Most non-treatment-seekers most well-liked to gamble using a smartphone at house, describing the ease, consolation, comfort, anonymity, and quieter setting in comparison with} a sports occasion or venue.