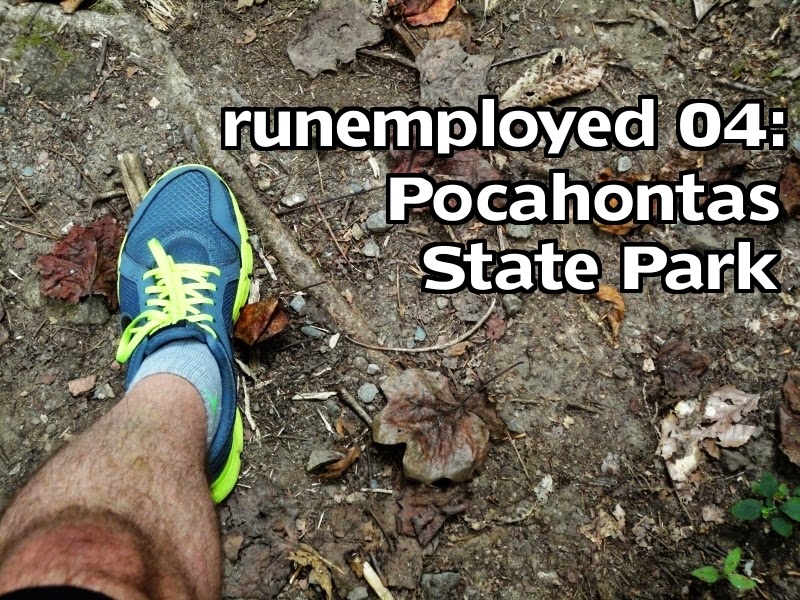 I am what one would charitably call "indoorsy." I've never enjoyed getting dirty. Bugs are the worst. Camping holds a tiny bit of appeal, but then I think of the bathroom situation and the lack of AC and I'm content with staying put. Darling, I love you, but give me Grove Avenue.

And yet ever since I started this thing I've been curious about trail running. Maybe it's because it's supposed to be easier on your joints than street running. (My aching knee would certainly appreciate that.) Maybe I've been longing for a change of pace. Maybe it was an aching to commune with nature that's laid dormant in me all these years. Either way today I decided to give it a shot and I made my way to Pocahontas State Park.

At 7,925 acres, Pocahontas State Park is the largest state park in Virginia. There are 80 miles of trails of varying degrees of difficulty for hikers, runners, mountain bikers, and even horseback riders. It's only 20 miles south of Richmond, but even closer to me here in the 'burbs. I used to go to summer camp there, but haven't been there since I was a kid. I certainly wasn't running on trails back then. More like counting the days until I could be reunited with my TV.

Studying a map of the park and doing a little online research, I chose the Beaver Lake trail chiefly because it is one of the shorter ones in the park. If I found that trail running wasn't for me it would be over quickly and I could sooner be reunited with my TV.

Anyone who knows me knows that I have zero sense of direction, so there was a fair chance that I'd be wandering around the woods for days, on my way to being the subject of a Dateline NBC segment. The Blair Witch may or may not be involved. Luckily, I was able to find my way to the lake without incident.

Now, one reason why I've held out on trail running is because that I've heard that you've really got to put your full attention towards it, what with the roots and stumps in your way on the paths. Not to mention the fact that you're sharing the trails with mountain bikers. And so tuning the world out with music is a no-no. Well, I'm a loner, Dottie. A rebel. Plus I need music when I run otherwise it's a real chore. I was able to both step lively and have a soundtrack to my jaunt. Suck it, haters!

It was a beautiful, cool, sunny afternoon, so only one song from my running playlist was a contender to be featured in the post. That'd be The Polyphonic Spree's 2003 single "Light & Day." Really, if you want to be at one with nature, this overly joyous ditty is your guy. It makes me want to put on one of my old graduation gowns and run through the hills in a state of pure, optimistic rapture.

Running the trails turned out to be quite fun! It's a very pretty park, though I expected there to be a little more lake to be viewed along the Beaver Lake trail. Some of the hills were fairly steep and I fully expect my legs to be feeling it in the morning.

I have three constant companions when I'm on my runs: my shoes, my phone, and one of my sweatbands. For some odd reason I totally forgot to put the latter on. A few minutes into the trail I was being blinded by sweat, but I pushed through until the end. Who says I can't handle great adversity?

All in all, I enjoyed my time today. Unlike the rest of my runs during this project, this one actually cost me money: a $4 parking fee. (Actually, $5 because there was no one working the gate and I didn't have exact change. Yeah, I could've chanced it and driven on through, but I'm an honest rebel.) Next time - and with so many trails to try, there will be a next time - I'll pack a lunch and spend more time there to get my money's worth.

So, I followed the day. I reached for the sun. I made it home in plenty of time to watch the New Girl and The Mindy Project season premieres. Whew!
Posted by Micah at 7:17 PM