Hey, folks. Sorry for the lack of blog lately - I've been tearing apart the house a.k.a. packing. One thing I came across was the 2005 Jones Soda Holiday Pack, which I got for Christmas. 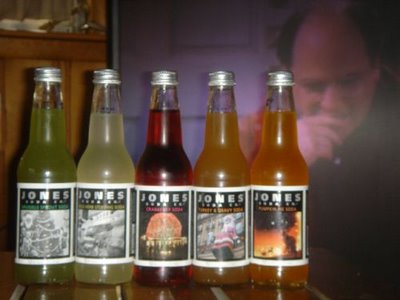 Despite the fact that the set is (at least) four months old, I decided to chill and taste it. All for your sick amusement. First course: Brussel sprouts. 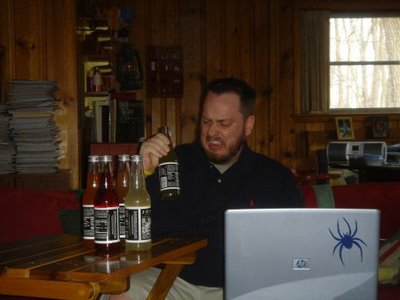 Until now, the worst beverage that I've ever imbibed was some absinthe Shamrock gave me over New Year's. We have a new champion. I like Brussel sprouts. I HATED this soda. Dear sweet Lord, it tasted buttery! Next course: Wild herb stuffing. 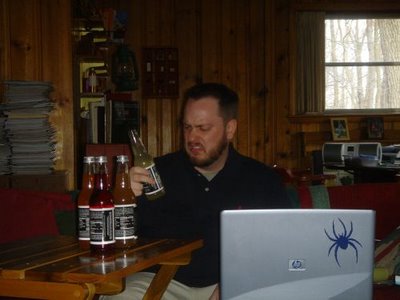 If this is what those Stove Top folks were selling, those kids in the commercials would be skipping dinner rather than doubling up (gluttons). Next course: Cranberry. 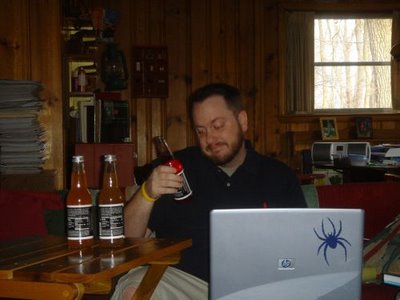 Not terrible. It tasted like carbonated cranberry juice. Next course: Turkey and gravy. 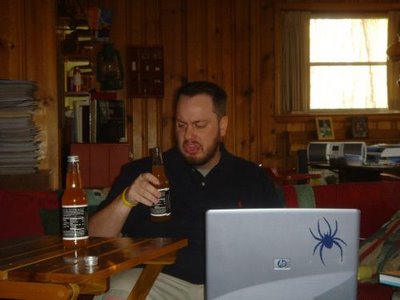 I didn't like it, but at least it wasn't the Brussel sprouts again. Last course: Pumpkin pie. 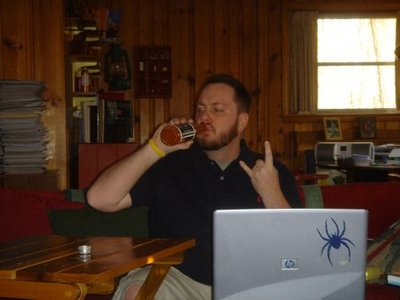 Pumpkin is the best variety of pie, hands down. Okay, maybe key lime is best. But, I digress. Initially, I was taken aback by how the Jones people simulated the taste so closely. I swear I tasted crust. But then came the aftertaste. I don't feel so well.

Overall, these sodas were disgusting. I didn't finish any of them. If I can pull myself up off of the couch, I'm going to make a real dinner now. And then do my taxes (which should be tons more enjoyable).

(BTW, don't fall in love with the beard, as it's coming off next week. I'm sick of it and my brother thinks it's funny if I have Fun With Facial Hair - like donning some wicked Neil Young-esque sideburns.)
Posted by Micah at 7:20 PM

I TOLD YOU ABOUT THAT TURKEY COKE!!

silly me, i thought you already drank that crap. maybe that was another blogger.

no wonder you have aftertaste.

who would drink AND enjoy that? o, yeah, gluttons.

Sonofabitch, I was just going to write that I was definitely digging the beard, and then you go and break my heart like that. Nice job, Fredo.

Just think if some of the brussels sprouts spilled into his beard...how that'd be a nasty reminder of that "beverage."

Seriously, Brussel sprout pop just sounds vile, but you truly cannot fathom how disgusting it is unless you taste it. If it got stuck in my beard, I'd have to consider suicide. No joke.

The beard was fun to grow during Christmas, but it's overstayed its welcome. A clean shaven face can only aid me in my a) job search and b) girlfriend search (unless I'm looking for a lumberjack position and motorcycle mama, respectively). Once I attain success in either category, maybe I'll grow it out again.

The taste is still lingering.

So did you finish any of the drinks?

That's what I was hoping, but I thought I'd check anyway.

I can still taste the one sip of that turkey one I tried at a Christmas party back in December. Ugh.

Loved the facial expressions. And Micah, that beard is hawt...

This is a good week For Micah fans to listen to ThisShowAgain.com

There's something special for you on this week's show.

I have to say you are one brave man doing all this in the name of bloggery. The faces you pulled tell all!

Wanted to say THANKS for being such a great DJ. I threw a St. Patty's Day party last month and we used the cds you made for Kate. Great music.

KtG - The beard is no more. Got it down to mutton chops and a goatee earlier and just a mustache now. Tomorrow I'll be facial hair free.

Kate - And people wonder why I'm taking a break. :)

Cheers - Glad you liked the music. And I was *this* close to sending out St. Patty's themed discs last month (but didn't find time). If you ever need some tunes, all you gotta do is ask...