Crush of the Week: Kristin Chenoweth

This week's Crush is actress, singer, and Miss Oklahoma runner-up Kristin Chenoweth. I always thought she was cute in those Old Navy commercials. (I actually dig her voice) 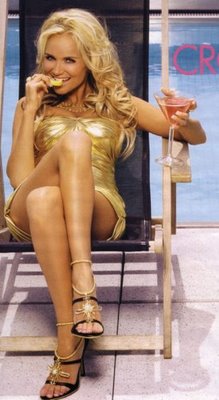 I was watching "The Tonight Show" last night (because Jack Bauer was on) and she was a guest. She just seems so...effervescent. And she can belt out the opera, too. She almost makes me want to watch "The West Wing"*. Almost. Don't think I'll be seeing RV, though. But sign me up for her Dusty Springfield movie.

i was reading that otherwise absolutely good-for-nothing rag "Rolling Stone" yesterday and they had a cover interview with JB and his self-destructive habits (yeah, it was kind of 'point-counterpoint'). so i just thought it interesting he was on largely good-for-nothing leno last night (though he already did a great interview on conan a couple weeks back... or was that letterman?).

and kristin was funny, like legitimately funny. (her constant gunning for her runner-up in miss okie; her operatic 'it's hard out here for a pimp'; her vicodin story [always good for a laugh]). i can see why you'd have a crush on her.

mw- thoughts:
1. per our earlier conversation, that was classic michael vs. dwight.
2. i can think of a few other reasons why she should be 'cotw'.

jasdye - I rarely watch Leno, but am glad I tuned in the other night. She really did do a great, entertaining interview.