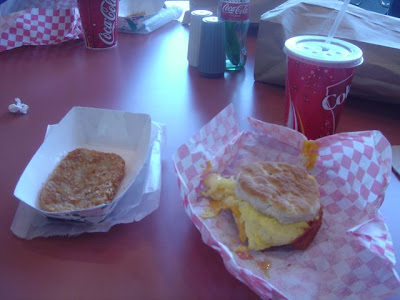 Having the day off of work calls for doing something special. So, this morning I partied like it was 1996 and had breakfast at my alma mater's fast food joint, the restaurant formerly known as the Pier (now called Tyler's Grill). Back in the day, the "Micah Special" was a bacon, egg, & cheese English muffin, hash browns, and a large Mountain Dew. Nowadays the place has no Mountain Dew (and I wouldn't have gotten one anyway, since I'm strictly drinking diet beverages now) and they switched over to biscuits, so I had to get the closest approximation of my morning college ritual. But at least the TV was tuned to Sportscenter, just like it always was in the Age of Seven Mary Three.
Posted by Micah at 12:59 PM

Email ThisBlogThis!Share to TwitterShare to FacebookShare to Pinterest
Labels: food, UR

I thought it was just an egg and cheese...no bacon? Granted, it's been more than a decade...I could be mistaken.

I think I ate at the pier twice in four years.

We totally missed the Rachel Leyco Band last month at the Cellar.