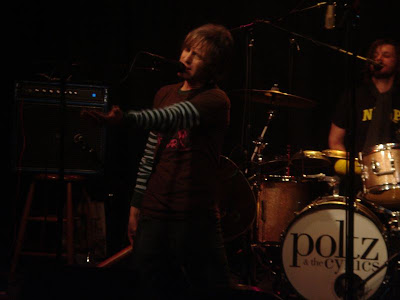 I have been a fan of Steve Poltz ever since I was the music director of WDCE back in the late 90s. The promo person in charge of pushing his solo debut was in love with him and I kind of had a thing for her, so I gave his album some attention. From the first listen I was hooked and have been a big fan of his music ever since. But I had never seen him live until this past Friday when he played at Ashland Coffee & Tea.

It was worth the wait.

The show started out with just him and his guitar. After a few songs he brought out his backing band the Cynics (who opened the show under the name the Truckee Brothers). Poltz is a master of what I love: stage banter. The venue - a coffee house - was intimate enough that he was able to engage the audience directly with his funny stories and observations. He genuinely sounded like he wanted to be there that night, playing for all of us in the room.

As for the music, he gave 100% on stage, playing a diverse selection of songs from his back catalog, new songs, and some choice covers ("Waterfalls", "The Way We Were", "Amazing Grace", and "Ring My Bell", which he broke into mid-song as a train passed by the window). At one point he chose people out of the audience to come up on stage and have them assume the role of his backing band while he ad-libbed some lyrics (with a German guy translating!). It was sloppy, good fun. But for the rest of the show he was a pro, expertly playing his songs, which range from sincerely goofy to goofily sincere. 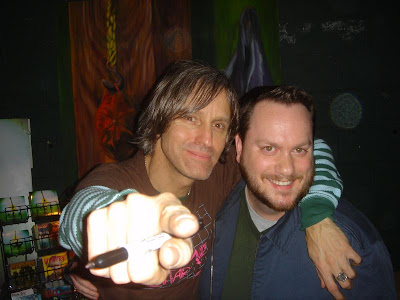 Afterward, he invited everyone to stick around, chat, have things signed, and take pictures. Of course, I obliged. I bought some CDs that I didn't already have (one a tour exclusive, the other a children's album) and had spydrz snap a photo (thanks!). All in all, it was an excellent show and Poltz seemed like a really cool person, with an approachable rock 'n' roll swagger.

Plus, he banged Jewel, so I am eternally jealous of him.
Posted by Micah at 10:46 AM

You forgot to mention the drunk frat boy who jumped on stage, cussing.

i'm sure he never hears that one!

but seriously, "waterfalls" by TLC, "the way we were (memories)", and the disco wonderlicious 'ring my bell'?

that does sound awesome fun.

spydrz - As I said the other night, I was afraid there was going to be a Mark David Chapman situation ("I love you, Gambler!" BAM!). Thankfully, there was not.

jasdye - He's even cooler than Steve Holt, if you can believe that. And it was a ton o' fun.

You should definitely come to our house concert next time.
Suffolk isn't that far from Richmond.
:)

Will do. Hell, after the show I was thinking, "I WANT TO HOST A LIVING ROOM SHOW!"