Well, another spring break at the Outer Banks has come and gone and I've traded cold, sunny Frisco for cold, rainy Richmond.

A few thoughts, observations, and experiences from the past week:

-My winterbeard is offically gone. Like usual, it was Fun With Facial Hair Week. I think my favorite temporary face covering were my kick-ass muttonchops: 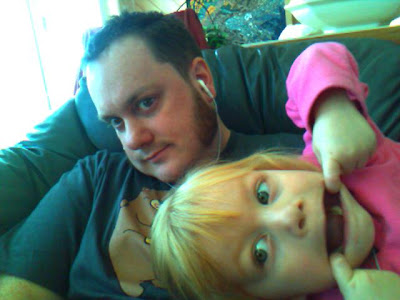 My second favorite? "The Jemaine" sideburns that I was sporting (named after my favorite member of the Flight of the Conchords).

-I had absolutely no Sprint cell phone service down there and I didn't really mind one bit.

-Stuff I spent money on (excluding meals and beer): 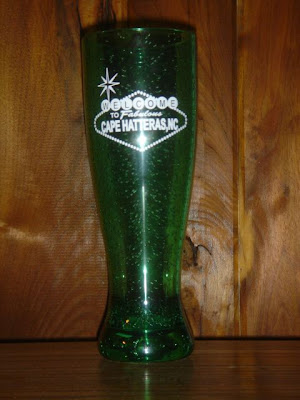 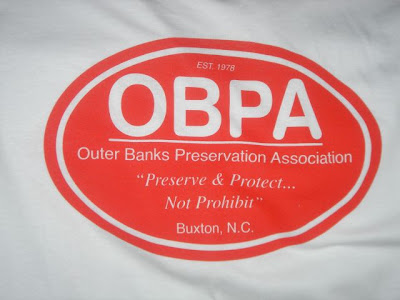 A beer glass that reinforces my view of Cape Hatteras as the "Vegas of the Outer Banks", an Outer Banks Preservation Association t-shirt (because I'm down with the cause), a pound of chocolate-peanut butter swirl fudge, and a box of saltwater taffy. The first day there I found a great pair of cheap sunglasses, but they had been sold when I went to buy them a few days later.

-If I were to open up a much-needed strip club in that area, I'd name it "Those Aren't Buoys", which would feature a "Motorboatin' Lounge." (I'm also reserving the name for my future beach house).

-Easter lasted all week. Unfortunately, none of the kids had a meltdown during the egg hunt.

-Capt. Morgan Tattoo is still on the market!

-All of the food was great, but my brother wins for cooking the best dinner. It was some Frenchy, er, "freedomy" chicken dish.

-I came very close to buying a pair of Crocs, as a store there had a "40% off" sale. Turns out that the discount only applied to their supply of Crocs in very gaudy colors, whereas I wanted a more formal black or navy blue. No dice.

-If a toddler is secured in a playpen, you can simply remove the barrier at the top of the stairs. There is no need to try to step over it while carrying 3 bottles of Red Stripe because you will most likely lose your balance, trip, and break one of the bottles of beer. Glass will fly all over the carpet, bruises will appear, and you'll look like an idiot in front of your family. Trust me on this one.

Where's the picture of the Jemaine sideburns? :'(

Ha ha. You know, I kept telling myself when I had them, "I should get a picture of these for the blog"...and then I forgot. Or was too lazy to do it at the end of the day. Or something.

At least I spared you guys the site of me with a mustache. Not pretty.

And I still can't believe I spent all day on Ocracoke Island while sporting the mutton chops, looking like a tool.

if youre going to buy crocs, you might as well buy purple ones with lime green stripes, cuz youre already gay for wearing crocs. i was the last person you know to get a cellphone...but i will never wear crocs.

thanks for the dinner love. its "coq au vin". only the most famous french dish. umami-licious.

the mutton chops were your best look. you need to pull those back out for your next job interview. if i were in HR and a dude walks in with chops, the bitch is hired.

that was a kick-ass week. thanks for the red stripe and the bison burgers.

There's a facebook group called "I Dont care How Comfortable Crocs Are, You Look Like A Dumbass."

Stop bragging. Some of us can't grow moustaches!

countparkula - I thought Crocs were stooopid when I first saw them, but I've worn RJ's pair and they are kinda comfy. Plus, they're good beach shoes. The prospect of getting them for 40% was what sealed the deal. Or it would have, at least. I still have to select what style of flip-flop will be mine for 2008 (Reef is my brand).

But it was a lot fun. We'll have have to do it again next spring.

spydrz - I've become a "fan" of a lot of things tonight of Facebook, but Crocs ain't one of them.

srah - Yeah, well, it's only fair because some of us can't rely on our feminine wiles to seduce elderly shipping magnates and other captains of industry and then bilk them out of millions. (I mean, I can, but others aren't so lucky.)

ha! doug, i am absolutely joining that facebook group. micah youre GONNA look like a dumbass. purchasing crocs is only something you'll regret a few years from now when theyre not cool anymore and we're STILL making fun of you. dont do it.

I think that ship has sailed...at least until the next 40% off sale.