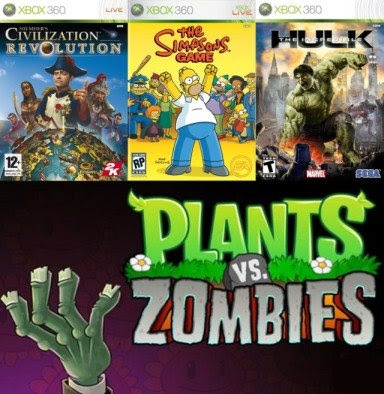 Civilization Revolution: The first evening that I popped this in I ended up staying up until 5 am playing it. But I won my campaign! Worldwide domination is pretty damn intoxicating.

The Simpsons Game: The critics were right in that (so far) this is the funniest episode of "The Simpsons" in years.

The Incredible Hulk: Sometimes a dude's just got to smash stuff, you know?

Plants vs. Zombies: This is an ingeniously simple PC game that's almost as much of a time vampire as Peggle. Evenings have been lost playing this, my friends.

Those should keep me busy until Beatles: Rock Band and Marvel: Ultimate Alliance 2 come out in September (two games of a very rare species: ones that I won't have a problem paying full price for).
Posted by Micah at 10:55 AM