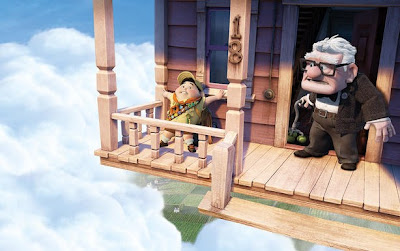 Up: I don't know what Pixar puts in their water, but they've produced yet another classic. If you only see one Ed Asner movie in 2009, this is the one you'll want to go to. And I've got to admit that I got a bit misty-eyed there during a couple of parts. I defy you not to get a little choked up in the first ten minutes. Challenge!

The Hangover: Hilarious, bawdy fun. You know, not that many movies show Vegas during the day (it ain't that pretty of a town in the sunlight). I'm so glad that general audiences are now catching onto the comedic genius that is Zach Galifianakis. The Comedians of Comedy are slowly taking over the mainstream. When can we expect a Brian Posehn romantic comedy?
Posted by Micah at 10:45 AM