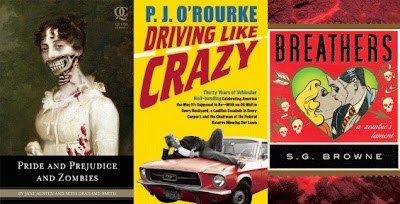 Pride and Prejudice and Zombies by Jane Austen and Seth Grahame-Smith I've never read any of Austen's stuff before. Why? It's severely lacking in zombie content. Luckily, that oversight has been rectified.

Driving Like Crazy: Thirty Years of Vehicular Hell-Bending by P.J. O'Rourke One of my favorite columnists/pundits/humorists puts the politics aside (mostly) and collects his writing about cars.

Breathers: A Zombie's Lament by S.G. Browne No love is purer than zombie love. Maybe after I read this I'll finally get inspired to write that zombierotica novel that's been kicking around my noggin.

I've really slacked off in my reading lately (thanks, Xbox 360!), but I think these three books should get me back into the swing of things and keep me occupied for a while. After I'm done with them, I'll probably try to put a dent in my immense reading pile by reading some older tomes: Donald Miller's Searching for God Knows What, Stephen Ambrose's Band of Brothers, Rob Bell's Velvet Elvis, William F. Buckley's God & Man at Yale, or Iain Gately's Tobacco.

Then again, I'm tempted to work my way through some epic books whose length seem a bit daunting: Atlas Shrugged, The Stand, or The Count of Monte Cristo (which I've already read the first 1/4th of).