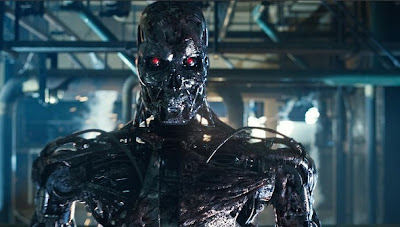 Terminator: Salvation: If you don't think too much about the plot holes, unnecessary characters, questionable motivations, and other nonsense*, this was a fun action flick. McG's palette of browns and grays really nailed the Judgment Day landscape. Honestly, I think my favorite part of the movie was the sound design. The various tones, buzzes, and beeps of the different terminators were pretty cool.

Star Trek: As I mentioned earlier, I've never seen a full episode or movie of this series before, but I had a freakin' BLAST watching this! It's definitely the highlight of the summer movie season thus far. They really made the movie newbie-friendly. The only real criticism that I have is that Simon Pegg doesn't appear until the last act. Also, apparently Diora Baird must've gotten cut out of the film.

WALL-E: So I finally got around to seeing this. It was cute, the animation was stunning, but I just didn't fall in love with it like seemingly everyone else on the planet did. *shrug*

*To see what could have been, read this and this. Maybe not the best choices, but pretty ballsy.
Posted by Micah at 10:55 AM

Wow! I cannot believe they were going to do that originally in TS. I must admit, I'm happy they didn't. Frankly, this franchise is just too much for anyone other than James Cameron. Also, yes I was one of the many who loved Wall-E. However, you have to see Up. It amazes me how Pixar can constantly re-set the bar for themselves. Disney would be nothing without them these days.

Just reading about the premise of Up last year, I was underwhelmed. But then I saw the trailer and I'm really jazzed to see it. Pixar magic!