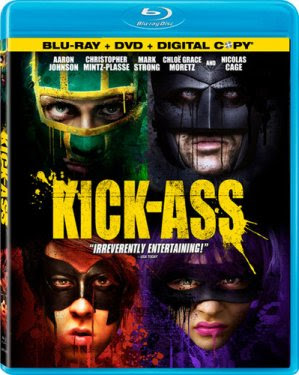 What makes a great DVD? Sure, the content of the movie/show/concert/whatever itself is imperative, but more important for whether something is to be deemed a success on the format is the audio/video quality, packaging, and the scope and depth of the bonus features. Due to budgetary reasons, an ever-increasing lack of storage space, and willingness to wait so as not to double dip on discs when I get my own Blu-Ray player, I've greatly slowed down my purchases. Honestly, I only bought a handful of titles. But I made sure they were all winners. Here are the shiny discs that I think were the best to come out in 2010:


Kick-Ass - Okay, so I still haven't really checked out the bonus features of this Blu-Ray, but it looks packed. The film transfer itself is excellent, though. The colors of this world of costume vigilantes absolutely pops.

The Office: Season Six - When it comes to DVD releases of TV shows, "The Office" is tops in terms of what it gives back to its fans. The webisodes (ugh, I hate that term) and bloopers are fun, but the real meat is the all of the deleted scenes. When you add it all it up it's like getting almost another 10-15 episodes. And it's not chaff; this is quality humor that just couldn't be fit in due to time constraints. Points off for completely excising the Halloween cold open of the "Koi Pond" episode because some nervous nelly watchdog group complained. Boo!

The League (The Complete First Season) - The deleted scenes and extended episodes make a funny debut season even better.

Survival of the Dead (Ultimate Undead Edition) - The movie was crap, but this Blu-Ray is packed with zombie goodness. The feature length documentary is better than the actual movie. And some of the autumnal scenery really is nice to look at.
Posted by Micah at 1:05 PM