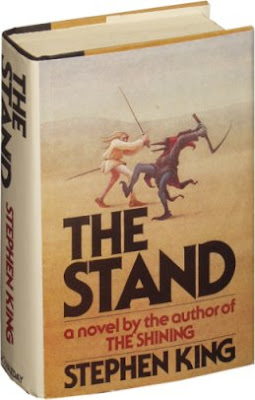 In 2009 I read embarrassingly few books. To make up for that, last year I read more books than in any other year, including seventeen books from an entirely new genre to me and the best freakin' book that I've ever read. My year end list for books is different than most people's since I'm a relatively slow reader. And sometimes inspiration takes a while to hit me. So I don't catch everything as it's published. So these are the best books that I've read in 2010:

The Stand by Stephen King - At 1,100+ pages, this epic novel is the longest book that I've ever read. But the daunting length did nothing to diminish how extremely intriguing the story is. Seriously, this is the best book that I've ever read. King really threw everything into this tale of good versus evil. I can't recommend it highly enough. Baby, can you dig your man?

Hard Case Crime books by various authors - I've decided to lump these together, but they aren't a series of books per se, but a publishing imprint. I had never really read any crime noir fiction before, but the dual siren song of a dollar store find and the best damn covers in the business swayed me. And I'm so glad that I spent those hundred pennies. Last year I ended up reading 17 HCC books and have loved every one of them. The cream of the crop: Christa Faust's Money Shot (murder in the porn industry; this is the title that got me hooked), Lawrence Block's Grifter's Game (the ending is completely shocking; I can only imagine how it played in 1961 when it was first published), and David J. Schow's Gun Work (this would make an excellent revenge movie). Hard Case Crime's original publisher decided to get out of the books-on-paper business this year (damn you, Kindle!), but luckily they found a new home and will resume putting out these pulp classics in the autumn.

Heart-Shaped Box by Joe Hill - Stephen King's son whipped up a very creepy ghost story, about an aging rock star haunted by his past. The first half is great, but it loses steam when the setting changes halfway through. Still worth a read if you want some chills.

The Lost Symbol by Dan Brown - Hey, I'm not above reading airport novels. And I like stories about the Freemasons, so it's got that going for it. In usual Dan Brown fashion, it's briskly paced. It's not as good as Angels & Demons. (The Illuminati are my favorite nutty conspiracy theory.) I'd put it on par with The Da Vinci Code. Great for the beach or your next trip to Washington, DC.

The old college try: Pride and Prejudice and Zombies by Jane Austen and Seth Grahame-Smith - Last year I tried yet again to read this, but I just couldn't get into it (again). It takes a lot for me to abandon a zombie tale and that special something is Jane Austen's writing style.
Posted by Micah at 9:45 AM

Email ThisBlogThis!Share to TwitterShare to FacebookShare to Pinterest
Labels: Best of, Books, zombies

word up, The Stand is one badass book, so are The Dark Tower books, especially Wizard and Glass.