So, whilst Christmas shopping a few weeks ago, I happened to stop at the local hipster dry goods market and general store and noticed an intriguing impulse buy: mini Simpsons figures. Cool! But there's a catch: each individual box is sealed and you don't know which character you've bought until you open it.

Interesting concept, but I'd much prefer to know what I'm getting. At $.25, a gumball machine isn't much of a risk. But at $10 a pop, which is what each of these suckers cost? Anyway, this weekend I went back to the shop and picked a box up. 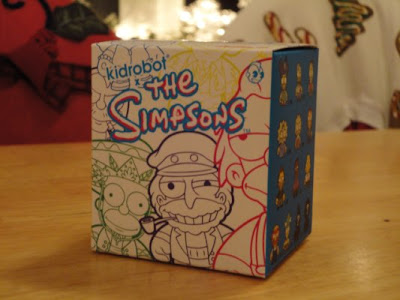 Of all of the Simpsons figures in this set, the one I really want is "Zombie Homer". Apparently, he's ultra rare and goes for upwards of around $80 on ebay.

But if I don't end up with "Zombie Homer" (and I don't expect to), the other Springfield denizens that I'd prefer to get are Moe Szyslak, Groundskeeper Willie, or Captain Horatio McCallister. The rest I'll accept (of course), but I may not rest until I get what I want. Maybe. 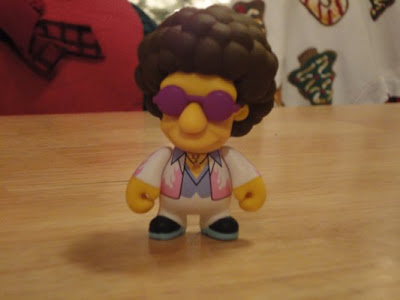 It's, uh, Disco Stu. Despite having one classic line - "Did you know that disco record sales were up 400% for the year ending 1976? If these trends continue...AAY!" - he's never been one of my favorites. You know, I've been wanting to try my hand at selling stuff on ebay. I think I know what item I'll put up on the auction block first.

I remain undeterred and may have to give it another shot. But if I get another so-so character - please no Patty or Selma! - then I'm out for good.
Posted by Micah at 10:10 AM

Okay, two good lines. You know, I could just give him away as a mystery prize for the Oscar pool, depending on if the recipient would appreciate it enough. What are your feelings regarding Disco Stu?

I think you're a fool! Who could you have possibly wanted more than Disco Stu? Homer? Psshht. Boring.

are there goldfish in the platforms? cuz that would be totally worth it.

srah - That's zombie Homer, thank you very much. And I mentioned above that I would love to receive some of my favorite secondary Springfieldians (Moe, Willie, Sea Captain). Read much?

So, looking forward to the Oscar pool now?

jasdye - No, there aren't and yes, that would.