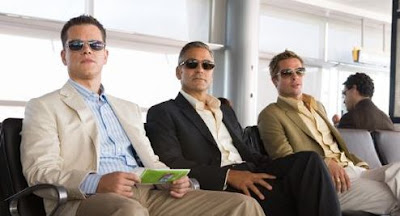 I'm a little late with this, as the 2007 summer movie season began with Spider-Man 3, Shrek the Third, and to a much lesser extent 28 Weeks Later. This week sees the latest Pirates of the Caribbean movie (honestly, I thought the second film was terribly bloated; the new one's 168 minute runtime doesn't give me much confidence). I've compiled a list of summer movies that I want to see; whether I get out to the theater is another question entirely.

Ocean's Thirteen (June 8) - Easily my most anticipated movie this summer. Why, when Ocean's Twelve was a let-down (although, got better on repeated cable viewings)? Well, 1) the first movie is one of my all-time favorites, 2) this one's set in Vegas once again, and 3) the creative team behind the series realizes that the second movie was less than stellar.

The Simpsons Movie (July 27) - As a certifiable Simpsons nut, I should be highly anticipating their first foray into feature filmdom. But given how craptacular the TV series has been for years now, I'm not terribly optimistic. But then again, some of the writers from the show's golden age are involved. Maybe, just maybe, this'll be on par with South Park: Bigger, Longer, and Uncut.

The Bourne Ultimatum (August 3) - Man, I'm looking forward to Matt Damn kicking some more butt. The only hesitation I have is that Paul Greengrass is back at the helm. His shakey camerawork was effective in United 93; in The Bourne Supremacy...not so much.

Fido (June 15) - It's about time we had another zombie comedy.

Superbad (August 17) - I am sooo not in the target audience for this movie, but the trailer really made me laugh.

Fantastic Four: Rise of the Silver Surfer (June 15) - The first one was fun (and that's pretty much it). The scene of the Human Torch chasing the Silver Surfer looked surprisingly good when I saw it a while back. At the very least, there's Jessica Alba. And the Commish/Vic Mackey.

The Ten (August 3) - I know next to nothing about this film except its comprised of ten parts, each concerning one of the Ten Commandments. But I'll go see anything from the State (Wet Hot American Summer, "Reno 911", "Stella", "Viva Variety").

Day Watch (June 1) - Night Watch was the best Russian vampire movie that I'd ever seen. Here's hoping the sequel can top it.

Live Free or Die Hard (June 27) - Okay, this movie wins the award for Worst Title of the Summer, but c'mon: it's the return of John McClane. If only Hans Gruber could be brought back.

Death at a Funeral (June 29) - British hijinks during a solemn occasion. Just watch the damn trailer and laugh.

License to Wed (July 4) - Looks like it could be bad, but I'm curious to see Jim from "The Office" in a lead role (especially opposite Mandy Moore).

Transformers (July 4) - Yeah, it's a Michael Bay movie, but I loved the toys as a kid, so I'm obligated to see this.

The Brothers Solomon (September 7) - It's got Gob Bluth and Pam Beesly in it. Bob Odenkirk directed it. The trailer produced a few chuckles. Maybe this one'll be a rental.

1408 (June 22) - This Stephen King adaptaion looks weird and creepy, but when's the last time I saw a horror movie (non-zombie related, that is) in the theater? I'm such a wuss.
Posted by Micah at 8:53 PM

Email ThisBlogThis!Share to TwitterShare to FacebookShare to Pinterest
Labels: movies

"y'know, i always thought Matt Damon was a bit of a Streisand, but I'm not so sure now."

I fought the law said...

Micah you totally forgot the best movie - Harry Potter and the Order of the Phoenix! I'm taking the day off work when it comes out....

jasdye - Funny you should say that. In a blurb in Entertainment Weekly director David Wain described it as "like The Decalogue, only funny."

IFTL - Mindy? Harry Potter is probably the biggest pop culture phenom that I have no clue about. Never read the books; never saw the movies. I just have no interest. But it doesn't surprise me that you are making the film's release a national holiday.

i just saw the first harry potter movie. still have yet to read any of the books.

not ga-ga over it, except to say it's very familiar and still fantastical (as in dreams and adventures and the like). like old comic books. so i could see why its got a big following. but not a massive following.

I fought the law said...

Yeah Micah it's me....I couldn't remember my old password so I had to make a new account...I love the Harry Potter movies and I finally broke down and read all the books they are GREAT books! Law school burnt reading out of me normally but I could not put these books down..especially the last one... Oh and the third Pirates movie sucked...3 hours of my life down the drain.

Mindy - I'm planning on seeing it out of obligation...likely on video (the only cheap theater in Richmond has the most uncomfortable seats; a movie this long would be a test of ass-durance).