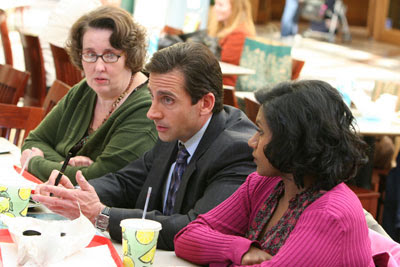 Outrage breaks out after Phyllis gets an unexpected eyeful from a flasher!

"I've paid for that privilege."

As usual, Creed's star shines for the brief amount of screentime that he gets: "The man was just hanging brain. Why all the fuss? If that's flashing, lock me up."

on an unrelated note; I do not like this grown-up Scrubs imposter.

Actually is it just me or is the show losing it in the last few episodes. They start strong and then fizzle by the end.

It's been such a strong season so far, it's must be a tough pace to keep up.

reg - Yeah, "Scrubs" is definitely on the decline. It still provides some laughs, but it's not the same.

TSA - Actually, I feel quite the opposite. I thought the season started out weakly, relative to the brilliant second season. But I've LOVED these past few episodes. I'm more concerned about the news that the show may be stretched to an hour next season. Don't get me wrong, this show is the reason to own a TV, but I fear that its consistent quality won't be maintained.