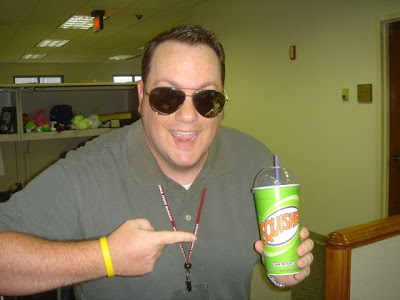 Who needs the Kwik-E-Mart?

Yesterday, a co-worker and I took a late-afternoon Squishee break. By now, you've probably heard of 7-Eleven turning a handful of their stores into Kwik-E-Marts. Unfortunately, I don't live near any of said stores, but at least I am subject to the Simpsons' "reverse product placement." 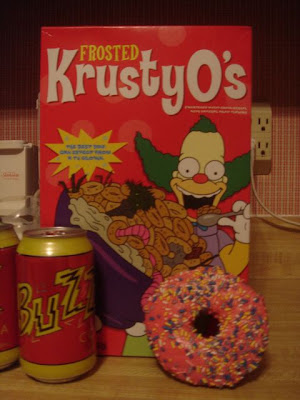 Unfortunately, I didn't get a jagged metal Krusty O in my box.

My bounty: a six pack of Buzz Cola, a box of Krusty O's, and Homer's favorite donut. Today I may go back for another Squishee (Woo Hoo Blue!) and get a collector's cup. I just wish they had Duff beer and Laramie cigarettes, among other things.

Those marketing people are geniuses, I tells ya.
Posted by Micah at 12:32 PM

When do they open the Canyonero dealer?

One can only dream...

I'd gladly drive one to the Live Earth concert.

"Tell those chicks to shave their pits and call me!"

Why am I not seeing much of that around here? Perhaps we really ARE Virginia's armpit?

Is that really true???

we're supposed to have 'em in chicago. but i've yet to cross

cattiva - If you live in VA Beach or thereabouts, then yes, you are in the state's armpit.

awww, that picture makes me wistfully nostalgic for VAFB. Say hi to Trin and Larry for me.

Squidjacked! Will do. Did you get to the Orlando Kwik-E-Mart? If not, I'll have to give you a beatdown.