I never thought it was such a bad little tree. 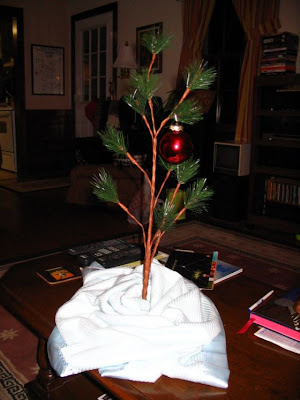 When it comes to my cube at work, I'm like Ryan from "The Office" when he was a temp: I can clear my things out on a moment's notice*. It seems that literally all of my co-workers are involved in a cubicle decorating contest. Today two of them asked me if I wouldn't mind if they strung some tinsel around my cube so it would be flush with the others and I agreed. I don't want to go all out, but I don't want to be the office Grinch, either, so I bought something tonight: the Charlie Brown Christmas tree and a baby blue security blanket to give it a little love. I'm not gunning for the decorating prize (Christmas is too commercial!), but I don't mind jazzing my workspace up a bit.

On a somewhat related note, although my buddy Chad and I exchange combined birthday/Christmas gifts later on in December, he gave me one early: this super cool Linus ornament. Press its button and he recites the Christmas story while a light shines on him. I think it's a bit heavy for my new tree, though.

*Personal items in my cube: 2008 "The Office" wall calendar, Squishee cup, a couple of issues of "Entertainment Weekly", a pack of gum, and the Emo Emu picture. That is all.
Posted by Micah at 9:59 PM

reg - Is there some deeper meaning to adorning your cube with dead flowers?

srah - Hilarious! (I'll overlook the fact that I was steered to a pro-Michigan site)

Update: other personal items in my cube include a bag of beef jerky, plastic water bottle, a Books-A-Million daily calendar, and a bottle of Germ-X hand sanitizer. Still, I could vacate this place in less in 30 seconds.

I could leave in the 2 seconds it takes to grab my cell phone and ipod...everything else is replaceable. Walk away, don't look back, and leave a mess for someone else to clean up...that's the SBSC way.

you're focusing on the numbers instead of the mindset...you've still got some growing to do, grasshopper.