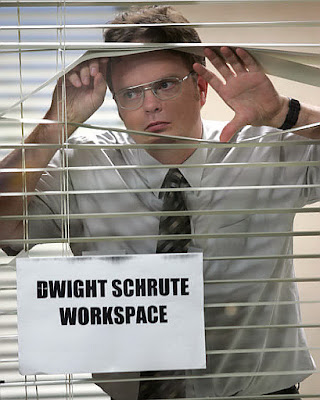 After Ryan excludes Michael from a corporate wilderness retreat, Michael heads into the woods for his own survival adventure with nothing but the suit on his back. Back at work, Jim tries to revolutionize the office birthday party.

Due to the WGA strike, this is the second to last new episode for the time being. Per Jenna Fischer's MySpace blog:

By now you may have heard that The Office has shut down production. This is true. They cleaned out my trailer and just delivered me 3 boxes of my stuff. It is pretty surreal. We cannot produce new episodes of The Office until the Writer's Guild strike is over.

Oh...there are only 2 unaired original episodes of The Office left. And, I'm sad to say the one we were getting ready to shoot was going to be the funniest of the year. I'm sure of it. They've been pitching this particular story idea for over 2 years...it involves Pam and Jim being in Michael's home but that's all I'll say. I hope we get to shoot it soon. Let's all stay strong and hope that the strike can end soon.

MW Bonus "30 Rock" Synopsis: With GE 'going green,' Jack must come up with an idea for a green mascot -- a Phillies-esque looking character named Greenzo. But when Greenzo's preaching becomes overly obnoxious at The Girlie Show, Liz gets fed up with the whole idea. Meanwhile, Kenneth plans his annual party, where Liz is the only one to ever show up, and Tracy spreads rumors to hype-up Kenneth's party but they soon get out of hand.

It makes so sad about The Office...hopefully this strike will be over soon-but I don't think so.

"He scores well with broads, colored people, commies and fairies. We really need to update these forms."

This episode of "The Office" was the worst of the series, IMO. There were some good lines, but overall it was just...not all that funny.