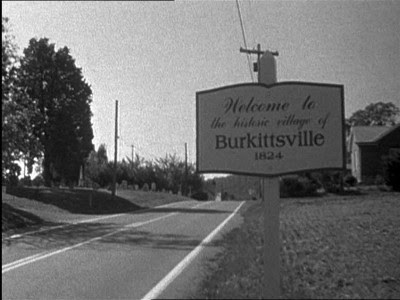 I originally saw The Blair Witch Project when it first arrived on DVD and I was less than impressed. My gripes with the movie:

1) The shaky cam: While the format of the movie necessitates the use of handheld cameras, the shakiness was a bit much. It was like watching my childhood home movies when my brother took over the reigns (see, he'd zip the camcorder around quickly on purpose).

2) The characters: I found all three leads to be really annoying. In order for one to root for a character, one must admire, identify with, or sympathize with him. But I didn't care for any of these bickering idiots (even when they weren't arguing). Plus, they were pretty dumb. Even if you are extremely frustrated with your fellow hikers, would you kick the group's only map of the area into the river? Didn't think so.

3) The lazy improv: I have no problem with profanity. A well-placed fuck can be very effective. But the overuse of foul language here, where the dialogue was all made up, just seemed like they couldn't think of anything else to say (see also Hill, Jonah).

4) The hype: I'm a wuss when it comes to horror movies. It doesn't take much to make me jump. "Scary as hell" read the The Blair Witch Project's one sheet. Not at all. Two scenes gave me the creeps: the one with the "children" laughing and screwing with the tent and the end in the house. Other than that, it was about 85 minutes of...nothing. And it's not that I'm a gorehound (aside from zombie movies), either. I very much prefer my scares to come from the atmosphere that the movie builds. This one just didn't deliver the goods.

I thought the marketing via its website, back story, and word of mouth was genius, though. It effectively used viral marketing before there was such a thing. Also, I thought that the pseudo doc "Curse of the Blair Witch" that aired on the Sci-Fi Channel (and is included on the DVD) was way more enjoyable than what it was created to promote.

Last week, though, I read an analysis of the movie and figured that I'd give it another chance to see if I could appreciate more now that some time has passed. Since I couldn't watch it with an audience in the theater, I figured that I should view it under the second most optimal conditions: middle of the night, lights off, sound cranked. Unfortunately, I wanted to get to it sooner rather than later, as I was borrowing a copy of the movie from a friend, and last night was a "school night", so a dark, rainy evening had to do. I fixed some comfort food (toasted cheese sandwich and tomato soup) for dinner and pressed play.

I still didn't think it was all that great, but it was better than I had remembered. There must be some correlation between the time removed from the hype behind a work and an increase in an ability to appreciate said work. Kind of like how I refused to listen to the Dave Matthews Band until I was well out of college. Then one day I bought Under the Table and Dreaming and, far away from the blind adoration of "Dave" (oh, how I would loathe the people that referred to him by his first name), I actually enjoyed the album. Anyway, although my attitude regarding the four points above remains unchanged, I at least like the movie a little bit better now. I don't know if I'd watch it again, though.

Now, the Skinemax spoof The Bare Wench Project...there's a movie that got it right the first time.

My friend also let me borrow Book of Shadows: Blair Witch 2. Unlike the original, this film lived up to its reputation. What a mess. I'm trying to think of something positive to say about the film, but I'm drawing a blank. The acting, dialogue, and direction were all sub par. But all of those failings could be overlooked if it was scary. But, like its predecessor, it wasn't. Therefore, the movie simply didn't work. It certainly wasn't the worst horror film ever (as Internet hyperbole would have you believe), but it didn't have much going for it, either. You can safely avoid this one.

Note: I don't know if I'll make the re-examining of movies that I didn't like (and their sequels that I never bothered to watch) a semi-regular feature. Input?
Posted by Micah at 10:11 AM

I believe that DMB album is titled "Out of the Closet and Flaming."

Ha ha. One of my finest hours. Yeah, I considered referring to the album by that, but how many years are we removed from the "Dave Matthews is bisexual/has AIDS" rumors? Would anyone even still get the joke?

I have to admit so long ago I was taken in by the crafty advertising. I remember the lines being out the door. However, the movie itself was less than impressive other than the interesting concept.

never saw it, though i was impressed by its hype and the whole "not-really-gore / it's-spooky-b/c-you-DON'T-see-what's-happening" vibe.

as far as the reexamining of movies you didn't care for the first time... only if they turn out to be wicked awesome the second time. like, Phantom Menace.

jasdye - The Phantom Menace was the bomb, yo! :)