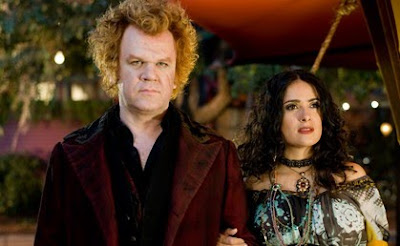 Well, I'm a bit late in getting this out. Some of my anticipated fall movies have already come (The Informant!, Cloudy With a Chance of Meatballs, 9) and, unfortunately, almost gone (Extract). But there are plenty of other movies coming out over the next couple of months that I'd like to see*. Here's what I'm looking forward to the most (in order of release date):

The Invention of Lying (Sept. 25): I'm not a huge Ricky Gervais fan - mostly due to ignorance of his work - but this comedy's got a great cast (Tina Fey! Louis C.K.! Jason Bateman! Jonah Hill!) and an interesting premise (a man becomes the only person in the world capable of lying and uses that to his advantage). It's got to be at least as good as Liar Liar, right?

Surrogates (Sept. 25): Like all Bruce Willis sci-fi films, this could be really cool or very bad. I'm hoping for the former.

Zombieland (Oct. 9): This one looks like a hoot. I'm always up for a zombie flick, especially a zom-com. It'll likely be one of the few on this list that I'll go see at the theater.

An Education (Oct. 9): The screenplay for this film about a 1960s London schoolgirl falling for an older man (Peter Sarsgaard) was written by author Nick Hornby and that's enough for me.

Where the Wild Things Are (Oct. 16): I'm not sure how you turn a beloved children's book consisting of only 10 sentences into a full-length film, but Spike Jonze is a master at producing great visuals, so I'm there.

Cirque Du Freak: The Vampire's Assistant (Oct. 23): The main reason why I'm curious about this one is because the sight of John C. Reilly as a vampire cracks me up.

Gentlemen Broncos (Oct. 30): I hated director Jared Hess' Napoleon Dynamite, but I love Jemaine Clement. The presence of the great Sam Rockwell splits the difference in this movie's favor.

The Box (Nov. 6): The director of Donnie Darko - which I still haven't seen (I know, I know) - brings this tale about a married couple given an interesting proposition: a mysterious man presents them with a small wooden box that has a button on it. If they press it, they'll get $1 million…and a stranger will die. Intriguing.

Fantastic Mr. Fox (Nov. 13): I'm a Wes Anderson buff and this features new music by Jarvis Cocker in it. Can I pre-order my ticket yet?

Red Cliff (Nov. 13): I'm also a John Woo fan/apologist. I even own the three disc Windtalkers special edition DVD set. Sigh. But this war movie is reportedly the most expensive Asian film ever, so it's got that going for it.

And though it's slowly been making the rounds across the country since August and still isn't slated for Richmond, I'm hoping that Big Fan eventually makes its way here. And is Romero's Survival of the Dead even going to get a theatrical release?

*As with my Summer Move Preview, I doubt I'll get to them all right away, though I have seen seven of the summer movies I was looking forward to.
Posted by Micah at 10:25 AM