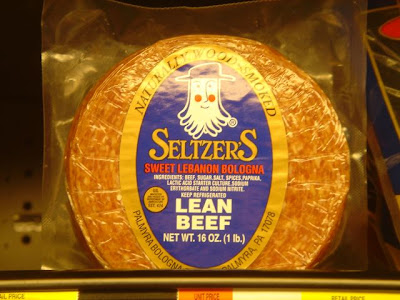 I was in a rut. For months every lunch I made included a sandwich made with Butterball deep fried turkey breast and I was getting burned out. Then, on a lark, I decided to try Seltzer's Sweet Lebanon Beef Bologna and, as my brother would save, it changed my life. If cold cuts are served on Mt. Olympus, surely Seltzer's Sweet Lebanon Beef Bologna can be found in Zeus's fridge. That's how good this lunch meat is. This ain't the stuff you put in some kid's brown bag sammich. It is a meat to be appreciated; to be loved.

But now it's gone. I've checked several grocery stores and can't find it anywhere. It's driving me crazy. I've tried switching over to the beef bologna made by Hebrew National and, while good, it's not Seltnzer's. It's true what the say: a taste of kick-ass beef bologna is worse than none at all.

Further, now I can't find the aforementioned deep fried turkey anymore, either. The lunch meat part of my life has gone all topsy-turvy. Sammiches are boring. *Sigh*

Note: If you're curious as to why I took a picture of this beef bologna long before it disappeared from the shelves, way back when I had planned on making an entirely different post singing its praises, but never got around to it.
Posted by Micah at 10:30 AM

Last time I found this was at the Brook Road Walmart. Way out of my way but so worth it for this bologna. You can sometimes find Seltzers behind the deli counter to be sliced but its not the sweet variety and not quite as good.

Great news! I'll have to make a trip there sometime. The Wal-Mart by Regency is where I usually scored my Seltzer's.

You know there is an episode of "Dirty Jobs" where Mike Roe goes to that factory? It wasn't really that dirty, so snack away my friend :)

You know, I figured it must've gotten some type of national exposure because after I made that post, I got a ton of hits searching for it. Thanks for clearing that up!

And I heartily recommend this bologna, if you're in the market for it (and can find it around you, which is likely since you're in the factory's state).