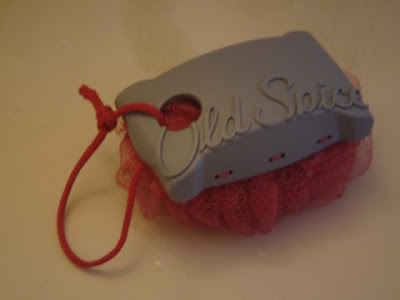 I don't like using bar soap. It leaves my skin feeling gritty and dry. So years ago I switched over to body wash, long before it became hip for men to use it. Back then it was just me and Craig "Ironhead" Heyward doing so. ("But, Ironhead, what's with this thingy?" R.I.P.) I've been through my share of, for lack of a better, more masculine term, poufs. It just so happens that recently I was in the market for a new one.

At first, I briefly considered the Axe Detailer Shower Tool because of its two levels of scrubbing resistance. But then I realized that it is an Axe product and I refuse to use their stuff because I am neither 14 years old nor a douchebag. Next.

So in a striking display of brand loyalty*, I settled on the Old Spice Deck Scrubber. It looks as manly as a pouf can look, in that it resembles a bar of soap (kinda). But I think the main reason why I picked this up rather than a garden variety $.99 one from Target is that college football season is upon us and the Deck Scrubber has a scarlet and gray motif. That's right. Even in the shower I'm a Buckeyes fan.

May I be bold enough to recommend the Old Spice After Hours body wash? I'm telling you, it smells better than most colognes! I always got compliments on it. Sadly, I have to watch my budget, and now can only afford the cheap Walmart body washes that come in a giant jug with a pump! LOL

I'll have to give that a try sometimes, just to shake things up. The thing with these big bottles of body wash is that it they last a long time (thankfully), so I don't know when I'll get to it, but I'll keep that in mind.

And there's nothing wrong with going off-brand. Every morning I have a bowl of Wal-Mart frosted shredded wheat. It's cost-conscious AND it keeps me regular. :)

I love this pouf and it is much cooler than poufs for girls.

Were you a tomgirl growing up? :)