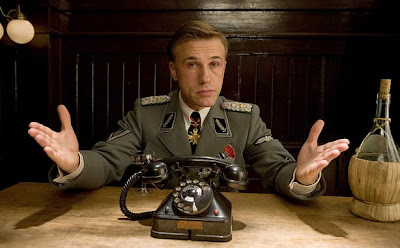 While 2009 wasn't a terrible year for movies, it wasn't the best one, either. I didn't catch all of the films that I wanted to, but of the ones that I did see, these are the best:

1. Inglourious Basterds - Tarantino's return was all I hoped it would be. Well, almost all, as I was expecting it to focus more than it did on a Dirty Dozen-esque band of soldiers. Brad Pitt made me laugh and Christoph Waltz was outstanding.

2. Watchmen - I may be the only person to hold it in such high regard, but I really dug this extremely faithful adaption of the funny book. Saying "it could've been worse" is not high praise...but, really, it could've been much more worse.

5. The Hangover - Hands down the funniest movie of the year and it still holds up on repeat viewings. I'm glad the world is finally discovering the genius of Zach Galifianakis.

6. Moon - Sam Rockwell gave an excellent performance as a man isolated in space (or is he?). It's a shame that he seems to be getting overlooked this awards season.

7. District 9 - Who would've thought that a relatively low budget South African alien flick would be better than most of the ludicrously expensive Hollywood blockbusters? Or more poignant than all of the Oscar bait?

8. Star Trek - Before this I had never seen a full episode of the series or any of the movies. I'm no Trekkie, but I had a blast watching this. Not enough Simon Pegg, though.

9. Zombieland - Obligatory Zombie Movie In Micah's Top Ten. This was the second most fun I had in theaters all year.

Jeers for not getting a wide release and thus I didn't get a chance to see it:
The Slammin' Salmon

Great parts, lackluster whole:
Where the Wild Things Are

Good, but didn't meet my sky high expectations:
Big Fan
Posted by Micah at 10:15 AM

I wanted to see Moon, but I must have completely missed it coming out in theaters. :(

I don't believe it got a wide release. I almost caught it the week it was at our arthouse theater, but plans to go with a friend fell through. So I resorted to, uh, "borrowing" it from the internet over the weekend and playing it on my Xbox. Sam Rockwell, if you're reading this, I do intend on buying the DVD at some point.

But it's really good. I highly recommend it. If there was any justice, Rockwell would get the Oscar.

well of your list i've only seen the last 3 (though most of the others are in my queue). 8 and 9 were very enjoyable, and you know how i feel about 10 - hated it so much i forget why i hated it.

I'll practice some unauthorized distribution and get you Moon and Big Fan tomorrow. I'd lend you Watchmen, but I don't think you'd like it (especially since I only own the 3+ hour "Ultimate Cut").

i love it when my childhood is rapped...

Sure, I'll bitch when it comes out...but I'll also likely go see it.

incredibly...i agreed with most of your list. though, i am a bit surprised at the absence of sherlock holmes....

Look at who surfaces! You know, we're not so different, you and I. And I can explain the lack of Sherlock Holmes: I haven't seen it yet. But it's on my list.