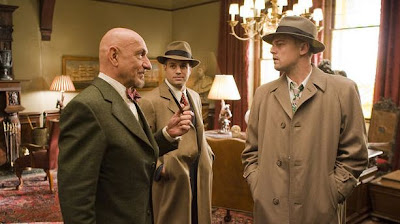 Shutter Island: It's best to go into this Scorsese film blind, so to reveal too much beyond the fact that it's about a U.S. Marshal investigating a missing person case at an asylum for the criminally insane would be doing you a disservice. Just know it's very tense psychological thriller with some great performances. Definitely worth seeing.

Avatar: The good: the 3D visuals are really eye-popping. The meh-to-bad: pretty much everything else (predictable story, serviceable acting, wooden dialogue, broad characters, heavy-handed message). It's sure pretty to look at, but strip away the candy-colored gimmick and you've got a run of the mill action flick.

The Box: A mysterious stranger gives a couple a box with a button on it and says that if they press it, they'll get $1 million, but someone they don't know will die. The straight-forwardness of the story ends with that Philosophy 101 dilemma, as it turns very twisty, with the complexity sometimes seeming to exist just for the sake of being convoluted. There are some creepy parts, but honestly my favorite things about the film are the exterior establishing shots of a snowy Richmond (including UR!). Note to writer/director Richard Kelly: as a suburban Richmond native, you should know better than to perpetuate Hollywood's tired "everyone that lives below the Mason-Dixon Line talks like Scarlett O'Hara" stereotype.
Posted by Micah at 9:35 AM

Email ThisBlogThis!Share to TwitterShare to FacebookShare to Pinterest
Labels: movies, reviews, UR

spydrz - I almost used Foghorn Leghorn as my example in this post, but thankfully Cameron Diaz never liberally applied the phrase "...I say..." in the middle of her lines.

srah - True. And it also works the other way. I've read books after I've seen the adapted film where the suspense was diminished because of knowing the outcome. But, yeah, I could totally see how reading Shutter Island would totally suck a lot of the enjoyment of watching the movie.