"And I let the bullet flyyyyyyyyyyyy": five Peter Gabriel songs I'd sing if I were on "American Idol" 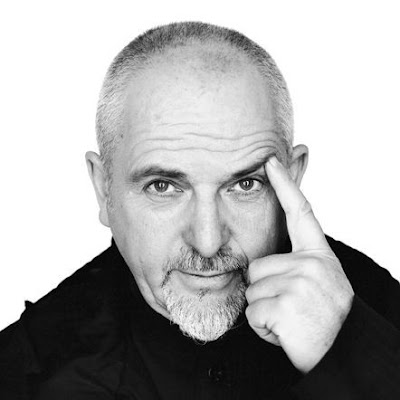 This week saw the domestic release of Scratch My Back, Peter Gabriel's album of well-chosen covers. Though I dig it, so far it's received mixed reviews. But then, Gabriel is one of my all-time favorite artists AND I'm a sucker for a good reinterpretation of another's work. It's virtually impossible for me not to enjoy the album.

I'm also vaguely aware of a television program called "American Idol". I don't watch the show, as it's just not my thing. With the exception of Christina Aguilera (in small doses), I just can't take the one-hand-on-the-ear "oversinging" style that so many contestants adopt. Not that I can sing myself. My many attempts to do so on Rock Band have made that abundantly clear. But pretend for a second that I do have actual singing talent, the will to endure the Byzantine auditioning process, and an actual interest in this glorified karaoke contest. Here are the five Peter Gabriel songs that I'd choose to cover on the show:

1. "Sledgehammer": Well, this being a mainstream TV show, you've got to go with the hits. It was either this or "In Your Eyes". As much as I'd like to unleash my inner Lloyd Dobler, the uptempo, double entendre-filled number gets the edge. Ladies, commence swooning.

2. "Family Snapshot": As we all know, the very definition of an "American Idol" crowd-pleaser is a song about the assassination of a political figure. And would you look at that? Gabriel has a multi-part one about the killing of George Wallace. There won't be a dry eye in the house.

3. "Intruder": Just to creep the audience out.

4. "Moribund the Burgermeister": An odd little theatrical song from back when Gabriel wore his prog rock roots on his sleeve, this has always been one of my favorite songs of his. If I could manage to replicate Gabriel's sweet moves, I'd surely win the crowd over.

5. "Come Talk to Me": Culled from an album about relationships, Peter Gabriel wrote this about the growing gulf between he and his daughter. I'd much rather belt this tune out than something like "Butterfly Kisses". I think Simon would appreciate that.
Posted by Micah at 9:10 AM

i love me some Gabriel. but haven't dug into his non-pop vocab so much (with his Passion being an exception that i need to drag out and open up my windows to in a few weeks...).

good on ya, matey!

Like Elvis Costello, Gabriel's one of those artists who I'll follow through their genre experiments (though EC has had far, far more than PG).

I used to have Passion on cassette - probably still do. I should dig that out. Haven't listened to it years.