Your inspirational thought for the day 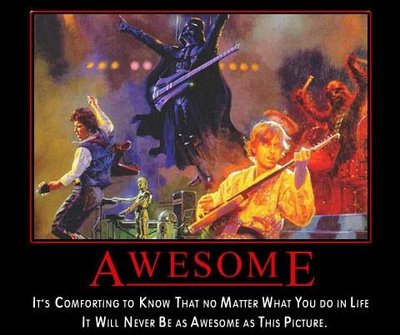 Kind of kills my idea for a supergroup featuring Optimus Prime on lead vocals, Voltron on bass, Skeletor on drums, C.O.B.R.A. Commander on lead guitar and Flash Gordon on rhythm guitar.

I was just passing through from Spydrzweb and couldn't help but notice that you have found the coolest picture on the planet...

- I think the best Solo's pose...Even in poster-land, he's cooler than everybody else in the movie.

Dubin's supergroup needs but one change; scratch Flash Gordon and replace him with Mr. T (circa 1983)...or Izzy Stradlin.

THSE - Any group with Clubber Lang in it has got to RAWK.

spydrz - He formed his own supergroup with Crispin Glover and Todd Bridges.

o gosh. i think we're all super-nerds. we should make our own loose affiliate of ne'er-do-nothings.

o wait. i think we're in it. and micah world's our Justice League of America Space Center.

crap. i can never run from my true identity. wherever i go, the geek force follows.

Micah--I believe that supergroup with Walken, Glover, and Bridges is called "Grave Danger."