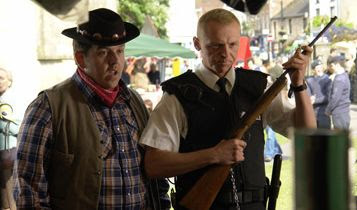 1. Hot Fuzz: This movie was the most fun that I had in the theater all year. Sure, it wasn't as good as Shaun of the Dead, but that's quite a film to follow up (in my eyes, at least).
2. The Lives of Others: If you would've asked me a year ago that a German film would rank number two on my list, I would've spat out my Spätzle. My grandfather's probably rolling in his grave right now.
3. Once: A late entry (just saw it over the weekend), this is a very moving story of a budding relationship. It has shades of Lost in Translation, only with more music and less Japanese people.
4. Knocked Up: The best sci-fi movie of the year. At least, that's how I'd classify any film where a man like Seth Rogen lands a woman like Katherine Heigl.
5. Ratatouille: Pixar combined my two passions - fine dining and animated rodents.
6. Superbad: Ah, to be in high school again.
7. Live Free or Die Hard: The second most fun I had in the theaters in 2007. This could've been really bad and my expectations weren't high. But it was a blast that didn't let up.
8. The Bourne Ultimatum: The thinking man's action film would've ranked even higher had diretor Paul Greengrass invested in a tripod.
9. 1408: See, kids. You don't have to show explicit gore to create a creepy movie.
10. Breach: Chris Cooper shined in this tale of espionage that, unfortunately, didn't really contain much espionage.

Less than meets the eye: Transformers

Regret not seeing in the theater: Grindhouse

Not as bad as everyone said: Spider-Man 3

As bad as everyone said: Hitman (I had a free ticket)
Posted by Micah at 8:42 PM

You neglected to mention "Wild Hogs."

Well, I had put it out of my mind. Thanks for dredging those painful memories back up.