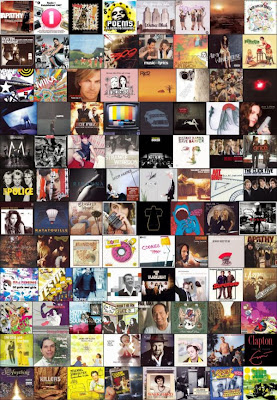 1. Amy Winehouse - Back to Black Forget all of the tabloid headlines. This is one hell of an album, from start to finish.
2. Lily Allen - Alright, Still Believe the hype. Every song's a winner on this one. Maybe a bit too "British" for American dominance, though.
3. Jarvis Cocker - Jarvis Like Pulp? Then you'll love this album. Jarvis grows older, but with his detached coolness intact.
4. The National - Boxer This is the sound of summer nights, happy or sad.
5. The Fratellis - Costello Music Just one big, Scottish ball of fun.
6. Josh Ritter - The Historical Conquests of Josh Ritter Great songwriter who tackles many different sytles...and more often than not succeeds.
7. Nick Lowe - At My Age Elder statesman of pop realizes he isn't getting any younger.
8. The Pierces - Thirteen Tales of Love and Revenge Two sisters change genres almost as much as they switch men.
9. Mika - Life in Cartoon Motion If you can't have Freddie Mercury, this is the next best thing.
10. The New Pornographers - Challengers Candaian popsters create melodies that are inescapable.

A note: I've revamped the rules for inclusion and the determining factor is that CDs need to have a domestic release in 2007 to be a part of the list. Because of that, there are some repeats from last year's list (1, 2, 3) and one new one (5). If you want to nix those from the list, include these honorable mentions:

11. Amy LaVere - Anchors and Anvils Country girl with a very unique voice goes bad...kind of.
12. Art Brut - It's a Bit Complicated They've practiced their instruments since their debut, but have retained their sense of humor.
13. Jens Lekman - Night Falls Over Kortedala The best Swedish pop record I heard all year.
14. Motion City Soundtrack - Even If It Kills Me Exceeds your minimum daily requirement of insanely catchy hooks.

Disappointments (in alphabetical order):
Crowded House - Time on Earth
Fountains of Wayne - Traffic and Weather
Hot Hot Heat - Happiness Ltd.
Northern State - Can I Keep This Pen?
Say Anything - In Defense of the Genre

Best Soundtracks:
Hot Fuzz The mixed tape format really works. Adam Ant bleeds into XTC, the Kinks meld into the Fratellis, dialogue is peppered throughout.
Once Beautiful.
Music and Lyrics If only for the spot-on '80s parody "Pop! Goes My Heart."

Best Compilation: Radio 1 Established 1967* 40 covers by mostly new-ish artists. Lily's Allen's take on the Pretenders' "Don't Get Me Wrong" is my favorite. Worth noting: By not switiching up the last verse with a guy, Girls Aloud add a lesbian vibe to Wheatus' "Teenage Dirtbag."

*Okay, so this is a UK import released in 2007, but I don't see it getting a domestic release, hence its inclusion.
Posted by Micah at 9:06 PM

no love for LCD Soundsystem (which i'm relistening to and reloving all over again for the first time again)?

I just wasn't feeling it like most else did. I prefer their/his first disc.

That said, I almost included "North American Scum" on the singles list.

Yep, Adam Schlesinger of Fountains of Wayne, whose album was just so-so and not as great as their previous efforts.

Dude can write some extremely catchy songs, though. Heck, even his theme to "Crank Yankers" gets my toes a-tappin'.